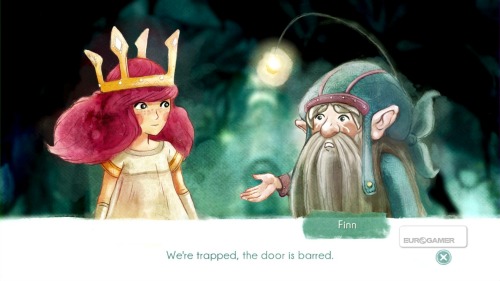 Ubisoft released a short walkthrough video of the upcoming release, Child Of Light, that featured a voiceover by the lead programmer, Brianna Code.

Child Of Light is a 2D side-scrolling game with turn-based RPG combat that includes a leveling-up system with a skill tree.

Child Of Light is developed within Ubisoft’s UbiArt Framework, a game development engine that transforms unedited concept art into a playable video game. As a result, the fantasy environments within Child Of Light are an interactive 2D backdrop reminiscent of a painting with clickable interactions rather than rendering a 3D world. Aurora’s ability to fly allows for experiencing the entire environment with hidden nooks and crannies encouraging exploration. Additionally, the 2D side scrolling gameplay allows players to open doors and jump down wells with a button press, while each new screen reveals another richly detailed environment. A small team of game developer veterans is designing the game in Ubisoft Montreal including Ms. Code who previously specialized in AI in AAA games.

The game is a fairy tale retelling set in the world of Lemuria where Aurora, a child far from home, can only return home by rescuing the sun, the moon, and the stars from the Queen of the Night. Aurora is joined by companions in her journey such as Igniculus the firefly who lights darkened caves and blinds enemies allowing Aurora to pass by without a fight. Additionally, the game includes features such as other players leaving written messages in the environment indicating a treasure chest or with recommendations of the character level needed to successfully complete an area.

The release date for Child Of Light is not yet announced, but the game will release on Xbox One, Xbox 360, Playstation 4, Playstation 3, WiiU, and PC. Watch the walkthrough trailer here.

Child Of Light is a turn-based RPG which is traditionally an accessible genre due to allowing time for players to plot a combat decision with a fighting strategy that compliments gaming barriers based on a disability. Gamers with fine motor disabilities should note that a creative timer puts a twist in the time delay that is standard fare in traditional turn-based RPG combat. A bottom bar has a “wait” and “cast” section that places each character in order of their turn in combat. The icons move forward continuously allowing for a combat action to be taken upon the icon reaching the cast zone. Combat can be paused to select an action but missing the zone completely loses the character’s action in the turn.

For the deaf and hard of hearing, the walkthrough included no noticeable in-game voice work with all conversation in text and conversational clues indicated via picture. Conversations in cut scenes are clear and readable on the bottom half of the screen. In-game text is smaller and on a light blue background making the text difficult to read while playing, but a simple change during development such as making the font bold may alleviate the difficulty.

For gamers with visual disabilities, the detailed backgrounds often include shadow effects which may make contrasts between the playable characters, visual prompts for interactive objects, and the environments difficult to discern. Heightening the contrast between gameplay components such as the playable characters and interactive prompts during development would provide the needed clarity. However, the game’s main menus and in-game menus are easy to read.