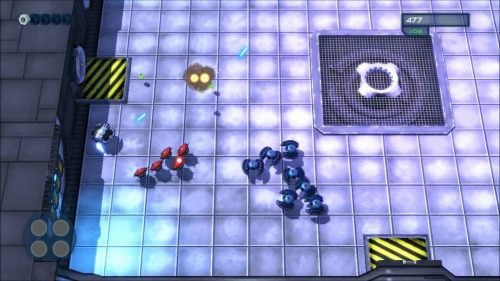 In Hexodius, multiple game modes and 6 worlds provide arenas for blaster battles where ultimately the player’s goal is to escape unharmed. Hexodius costs $9.99 and is also available on Steam for the same price. Both platforms also feature a free demo for experiencing the gameplay firsthand before purchase.

Hexodius includes a story and arcade mode, bosses, and online leaderboards. The gameplay resembles a joystick style arcade shooter with the atmosphere of a Portal game with a science laboratory gone bonkers. From a top down view, the player controls a spinning robot. With a game controller the right analog stick moves the robot while pushing forward, and rotating the left analog stick fires the robot’s weapons. While the dual analog stick controls are recommended, a keyboard and mouse option is available on Steam.

Whether in story or arcade mode, the goal is survival. The player is set in a room with various enemy droid types attacking in waves. In story mode, the player is tasked with navigating a series of rooms in order to cross a scientific laboratory with machinery gone rogue. In arcade mode, the player stays alive while preselected special attacks and other bonuses are triggered by the clock. The battle arenas include a variety of goals from survival until all enemies are defeated or destroying the generators before the time limit expires.

The free demo allows all players access to the gameplay before a purchase commitment-a feature much appreciated by disabled gamers as more games become downloadable, thus difficult to play firsthand without buying. Note that the game provides little, if any, gameplay options other than difficulty settings, making the gameplay only playable as is.

The dual analog stick controls are an obstacle for fine motor control disabilities. Whether with a game controller or a keyboard and mouse, both hands must simultaneously control movement and firing direction. Note that this requires both hands “steering” at all times, one moving the robot and one aiming the weapon.

In the demo, there is no audio dialogue. All instructions, whether by the artificial intelligence command center gone awry or the player’s egotistical creator, are in text by default. The text is clearly readable, including an opaque black background along with both color coding by character and an accompanying picture of the speaker. For visual disabilities, the screen often becomes crowded with various waves attacking and missiles flying, but color schemes differentiate the robots and the dropped loot for pickup.