Be A New Recruit In Army Academy Alpha 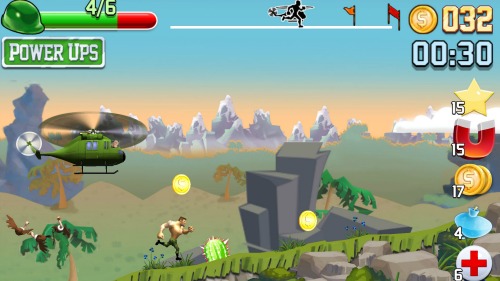 Moxy Games released Army Academy Alpha into digital app stores for iOS, Amazon, Android, and Nook. The game for Windows 8 is coming soon and is available free or for $3.99.

The game has 3 environments, 63 levels and over 20 ranks as well as multiplayer providing competitions against friends and other players. Initially, Army Academy Alpha resembles most other 2D side scrolling games but with an army theme but the game manages to instill the side scroller with more depth and variety.

Levels are sectioned off into army rank names from Private to Grand Master Sergeant and the character model changes with each new level in reflection of the rank. The 3 environments each have different gameplay. The mountains are a familiar experience as the player jumps, double jumps, slides, and runs faster past a series of obstacles from rolling boulders to snakes while staying ahead of the pace helicopter and collecting coins for power ups. Rather than a 1 hit death, the player starts with 6 hit points and coin payout will allow a level to be restarted at a checkpoint. Enough coins are available for in-game collection to provide modest access to using checkpoints and grabbing a power up or two. Additional coins are available in bundles for purchase with real world cash.

The other two levels are underwater and jungle themed. The underwater portion uses swimming rather than running. Swimming changes jumping and sliding with collecting air bubbles and punching dangerous fish. The jungle challenges the player with vine swinging requiring both timing and correct location on the vine for the needed jump angle onto the next vine. The 3 environments rotate throughout each level.

The free version includes ongoing advertisements. There are two types of advertisements, intermittent 15 second advertisements that require the entire screen pop up when moving between menu options and a permanent advertisement is located at the bottom of the screen.

Note, I played the game on my Android smartphone, a Samsung Galaxy 3, and as a deaf gamer I play games on my smartphone without the sound due to the cumbersome nature of attaching my hearing aid peripherals on the go. I cannot attest to the sound quality or the voiceover work but I was able to play the game successfully without the sound.

For fine motor disabilities, the game uses familiar touchpad gameplay requiring one finger to tap the screen, double tap, swipe forward, swipe down, as well as move up and down. The hit points and power ups mitigate accuracy difficulties when tapping and swiping. The permanent advertisement on the bottom of the screen often got in the way of my gameplay and I accidentally tapped into the advertisement more than once. Unable to progress past a checkpoint in the jungle, I used my collected coins for a friendly hippo who provided a jump back up when I missed the vine.

For visual disabilities, the levels I played clearly delineated the player and obstacles to navigate with shapes and color. However, the screen does become busy and environments such as under the sea and the swamp use an overabundance of the same color, such as blues and greens, in different shades for the background and ambiance.

There are concerns primarily for fine motor and visual disabilities but the game download options includes a free version for disabled gamers to experience the game in relation to our disabilities firsthand before a purchase.