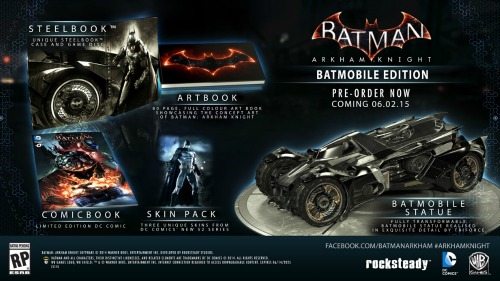 Batman: Arkham Knightis a next generation only game for the Playstation 4, Xbox One, and PC that was originally slated to release in fall 2014.

The Batmobile Edition includes everything in the Limited Edition but switches the Batman statue with a Batmobile statue that is “fully transformable.” The introduction of an in-game, player controlled Batmobile into Rocksteady’s Batman franchise is one of the main reasons why the game is next generation only.

The new release date is further away than anticipated but the delay from fall 2014 lessens the crowded game launch season for disabled gamers who cannot afford multiple new game purchases. For disabled gamers with fine motor disabilities, the inclusion of an in-game Batmobile hinges on its controls, especially since the vehicle requires both driving and use of weapons in Battle Mode. Driving mechanics can be in inaccessible obstacle in an otherwise accessible game.