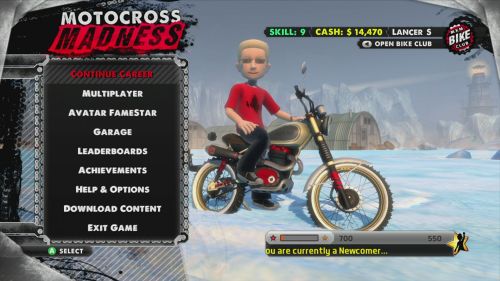 Motocross Madness was a long-dormant franchise before Microsoft revived it last year. This reboot uses your Xbox 360 Avatars and brings together a wide variety of racing modes with fast-paced action. Most download-only racers have been sub-par on consoles, but Motocross Madness is rock-solid. It was underhyped and overdelivered in terms of content. There are four single-player modes offered up, including a ladder of races, time trials against developer ghosts, an exploration mode that allows you to grab a lot of goodies – including new tricks, and a points-based trick mode that you’ll unlock after reaching level eight in XP. You can also use XP to earn items for your avatar and snag new bikes and upgrades for them. Tracks aren’t unlocked this way though, and are obtained through progressing in the core game.

There’s a healthy variety of gameplay options on tap, which means that it’s of the utmost importance that the gameplay delivers good stuff – and that’s largely the case here. Racing is fast-paced and always exciting, while the tiered trick system is user-friendly as only X and Y and some stick movements are needed. This means that if you’ve got some minor issues with your motor skills, you can still pull of tricks regularly. Some modes feature on-tracks skulls that will multiply your score upon landing, which is when you’ll want to focus on the longer Y-button tricks, while core races requires alternating between X and Y button tricks to build up your boost, activated with A like Pure from many years ago. Unlike most off-road games though, this one gives you two bosts. The basic blue-flame boost and then a super-charged orange-flamed one that happens after you’ve filled the blue charge bar up. Flames form around your tires and it’s a great reward for patience since this boost gets you more height on jumps and more distance as a result. However, there’s more risk/reward at play here too since you’re tempted to go for a longer trick for greater gains and then wipe out.

A wipeout sets you back a bit, but luckily, this has an excellent respawn system. You might get knocked off, but you’re put back around where you were before and it works instantly. As a result, you don’t need to worry about being in first or second place, getting knocked down, and then going towards the back of the pack in one fell swoop. Since rubber band AI isn’t a problem in the game, you’ll actually feel a sense of accomplishment with each win. The regular racing action is very responsive,a s are the tricks, and the Road Rash-style combat using the bumpers works very well. Everything involving the gameplay has a high amount of polish, and that’s impressive for a download-only game.

Visually, the game is far more hit or miss than the gameplay. Character models and bikes generally look fine, with realistic touches like dirt buildup on them helping a lot. Trick animations are also really smooth, and have smooth transitions from one another and from tricks into crashes. There’s a nice variety to the environments, and some look incredible from afar – like the theme park area. Sadly, some areas are full of low-res textures hurting everything, like the ice-filled area having some muddy textures and the Egypt areas look awful up close. Then there are portions of the graphics that are so bad, they’re good. This includes texture pop-in that makes everything a smeary mess untilt he textures load, and hurts outfits and environments. It takes a few seconds to clear up, but until then, it looks rather dreadful. Clipping issues hurt the graphics as well, as you’ll notice tires going through the ground before the pre-race portion, and your character model will get stuck in the ground after crashes – making it appear that you’ve lost a limb into the ground. Motocross Madness’s audio is very friendly for the hearing-impaired because there simply isn’t much to miss. The music is absolutely nothing special, while the sound effects are very good, but not amazing.

As a $10, Motocross Madness was an easy recommendation and as a freebie with an Xbox Live Gold membership, it’s a no-brainer. It has a lot of rough edges to it, but winds up being greater than the sum of its parts. Racing games aren’t generally the kindest things for those with disabilities, but luckily, this one is really fair and doesn’t use frustrating rubber-band AI. It’s very forgiving if you’ve got motor skill problems, and has such vibrant environments that it’s easy to see for those with vision problems too. Anyone with an affinity towards motocross racers should download this as soon as possible.