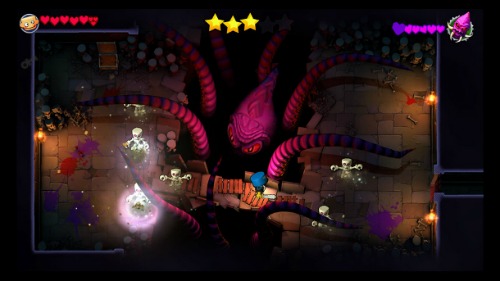 This week’s Weekly Freebie will keep PlayStation users busy while they wait for the flood of new game releases that begins next week.

The developers at Creat Studios are downright maniacal. One of their hottest titles, Labyrinth Legends is a top-down dungeon crawler that tasks players with smashing zombies, gathering coins, and collecting magical treasures. Sounds simple, huh? It’s not. Labyrinth Legends has a reputation for being incredibly hard. Amazingly, however, the difficulty does not affect the game’s accessibility for many disabled players.

To begin with, there’s absolutely no story in it whatsoever. There are a few tongue-in-cheek cinematics that seem to be there to mock the classic habit of trying to shoehorn a story into an otherwise foundationless dungeon crawler. But there is no dialogue of any kind. Everything in these cinematics is communicated using cartoony animations. When you get into the gameplay, the situation doesn’t change. Nothing is communicated using sound. In fact, for those hearing gamers out there, it wouldn’t be surprising if you wanted to mute your TV simply to avoid the soundtrack—which can get a little bit grating after playing for a couple of hours.

Even more impressive is that the game does not use color to communicate much. The one exception is keys to doors. But the solution to this is simple. If you have a key and it’s not unlocking a certain door, go find another one, because it’s probably in a hidden room somewhere close by. It is also true that there may be occasion for players with visual disabilities to miss things such as hidden doorways and chests because they are not well defined in maps, but that’s part of the point of Labyrinth Legends. Even if you had no issue seeing, the game still wants you to check every inch of the level before moving on to make sure that you’ve unlocked every secret. So the ability to see clearly or even to see color does not affect how quickly a player can progress through this game.

Those with fine motor disabilities are the only ones that might struggle significantly with this cartoony dungeon crawler. Many of the puzzles do have time limits. But the gameplay is forgiving enough that for the majority of the game it will not matter. For instance, there are puzzles where you have to pull a block onto a magical button within a certain period of time. If this is too hard, don’t worry. You can skip that area all together. Progression is based on the number of stars you have. There are five stars in each level, but you don’t need to collect them all in order to advance. Beyond that, each dungeon you go through is incredibly short—less than fifteen minutes long on average. As a result, you won’t spend much time retreading ground even if you die repeatedly.

All of this means that even though Labyrinth Legends does live up to its reputation for being incredibly difficult, the fact that it is forgiving and that it is free means that it is definitely worth taking the time to download.