Assassin’s Creed Unity Announced As A Result Of A Leak 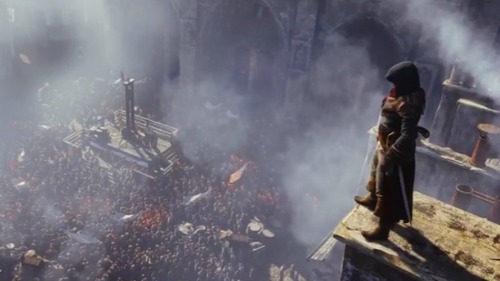 The trailer is available here. Assassin’s Creed Unityis a next generation game releasing in the 2014 holiday season for the Playstation 4, Xbox One, and PC. The next generation capabilities are showcased in a trailer consisting of “alpha game footage.”

The game has been in development for more than three years. In reference to the leaked information Ubisoft quipped that the studio, “…wanted to find the perfect time to give you an early taste of the game. Apparently though, the Templar Order was hungry to know more right now. To this, we say ‘Qu’ils mangent de la brioche!’ (‘Let them eat cake!’). Help yourself to a serving of the first official footage from the next-gen only Assassin’s Creed Unity.”

The trailer’s setting outside of the Notre Dame Cathedral, banners signaling the French revolution, a pictured guillotine, and a Marie Antoinette reference in the press release is indicative of a game set in Paris during the French revolution. An unnumbered entry in the Assassin’s Creed franchise is a notable due to the series’ use of numbered games for introducing new Assassins and unnumbered games as a continuation of a previous Assassin’s story.

The Assassin’s Creed franchises’ multiplayer mode remains an atypical multiplayer that provides a more accessible gameplay experience. Disabled gamers on next generation consoles await news on whether or not accessibility features such as multiplayer that allows purchasing necessary abilities that compliments disability related needs in gameplay continues into a next generation exclusive title. Especially given rumors about an unconfirmed four player co-op mode in multiplayer.