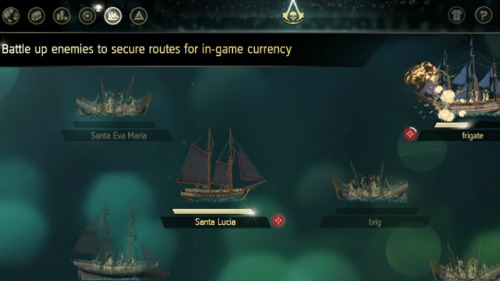 Additionally, Ubisoft released the game’s “Companion App,” a second screen experience. The app features a series of tools to compliment the console gameplay both in conjunction with console playing and away from the console. The world map makes the entire map viewable on the second screen as opposed to the in-game mini-map onscreen during gameplay. From the app, players can set waypoints for treasure chests, view and analyze treasure maps they find, and see enemies throughout the entire map for combat strategizing. Additionally, Kenway’s Fleet is available for fleet management including assigning ships to trading missions and engaging in the turn-based naval battles. Other uses includes accessing the animus database and reviewing your mission progress.  You can view a walkthrough of the app here.

Second screen technology remains relatively new and not heavily integrated into video game systems. With the next console generation continuing its arrival in the next day, such technology may become more widespread.

Kenway’s Fleet is an ongoing evolution of the Assassin’s Creed trading system, which utilizes menu navigating and strategizing rather than twitch reaction gameplay. Such gameplay should port well to mobile devices, allowing all gamers more access to the game. Due to the newness of the technology and without hands on experience, it remains unknown whether or not a second screen open in conjunction with console gameplay is a more or less accessible experience.