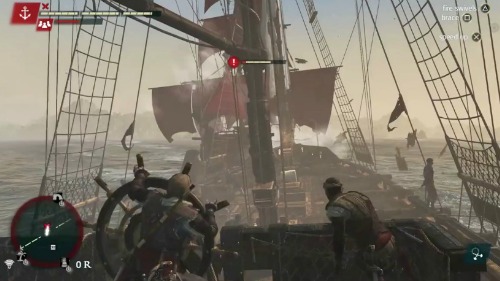 After the wait Assassin’s Creed IV Black Flag debuted yesterday, October 29, 2013, for the Xbox 360, the Playstation 3 and the Wii U. The drop of the game comes a day short of a full year since Assassin’s Creed 3 was released on October 30, 2012.

Nowadays, the release of an Assassin’s Creedgame is as dependable as the seasons changing or the holidays descending.

Assassin’s Creed IV Black Flag will continue to release on other platforms, with a release on Windows PC on November 15, 2013, and it will arrive on next generation consoles as day once launch titles, with the game dropping on November 19, 2013, to coincide with the Playstation 4 and on November 22, 2013, alongside the Xbox One.

The game introduces the ancestor Edward Kenway, the grandfather of Assassin’s Creed 3’s ancestor, Connor. The historical backdrop of a time when the classic pirate was commonplace showcases the shift from the privatized pirating of the British Royal Navy into a free for all loot fest following the end of wartime. Edward comes to know infamous pirates of the time such as Blackbeard and Charles Vane while the ancient feud between the Templars and the Assassins infiltrates the Golden Age of Pirates.

A Season Pass is still available for a single $19.99 purchase, offering a 20% discount off of the regular prices for the individual content downloads. The DLC includes single and multiplayer add-ons, including the single player content Freedom Cry, the tale of Edward’s first mate, Adewale, who uses his pirate skills in a battle against the practice of slavery. The DLC will also include new multiplayer characters.

With an average Metacritic score of 85, the buzz surrounding Assassin’s Creed IV Black Flag’s release is positive. Keep an eye on this space for DAGERS’ review (coming once the game releases on next gen) answering our disability related questions.

Certainly, the recent iterations of Assassin’s Creed are mostly accessible, with a plethora of weapon options and combat approaches available. The latest game introduces naval gameplay both for travel and exploration as well as combat as a main gameplay component rather than a side mission focus. Accessibility questions remain. Does the ship steering and/or combat require simultaneous two-handed controls? Do underwater portions have unforgiving timing related to getting air? Are the much-ballyhooed sea shanties captioned? There are the usual video game related questions as well. Does Edward get hurt if he dives from a high point into shallow water? Is there an Easter egg of Altair commiserating over Edward’s swimming prowess when water was a one-hit kill for the original assassin?