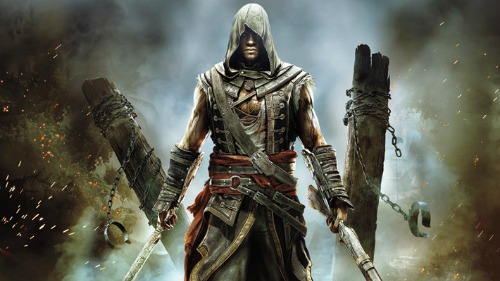 We are officially in the fall season of 2013 therefore an Assassin’s Creed game is upcoming. In addition to the game itself, Ubisoft announced a Season Pass offering a 20% savings from piecemeal purchases of the game’s DLC by offering all of the DLC for $19.99 via a Season Pass.

The announcement’s focus is on the spin off single player story dubbed Freedom Cry. The tale centers on Adewale a born slave who lived free as the second in command pirate with AC IV Black Flag’s progtagonist, Edward Kenway. Adewale is drawn into the plight of the Maroon slave community in Saint-Domingue. During an estimated 3 hours of gameplay Adewale builds a following to his pirate assassin lifestyle and faces his own slave beginnings while leading a slave revolt. Along the way we pick up historical tidbits such as that Maroon communities were independent settlements of escaped slaves most commonly found in North, South, and Central America as well as in the West Indies.  Check out Freedom Cry’s trailer here.

Whereas Assassin’s Creed 3 gave us the DLC single player story of a historic “what if” bestowing supernatural powers on the assassin Connor, the game’s protagonist, as he fought the tyranny of King George Washington. AC IV Black Flag shifts the single player story from the central character by adding a new playable assassin.

Additionally, the revealed content of the Season Pass includes the exclusive Kraken Ship Pack that is not available for individual purchase which includes a sail, wheel, and figurehead inspired by sea monsters as well as new multiplayer characters.