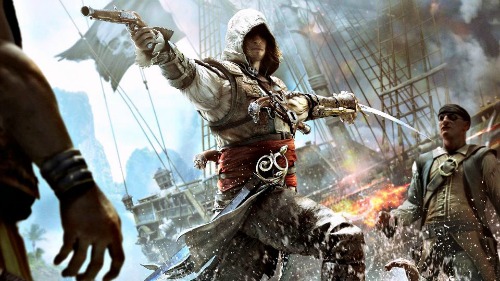 Ubisoft announced that Assassin’s Creed IV: Black Flag for Windows PC is now at gold status and will hit the market on November 19, 2013.

According to the Uplay website, the Uplay Deluxe Edition includes all of the pre-order bonuses previously available with other retailers such as The Black Island Pack, originally featured at GameStop, and the Hidden Mystery Pack, originally featured on Amazon. Additionally, included is the Season Pass and a start with more resources as well as increased cargo capacity. This edition retails for $79.99. You can check out the edition here.

The Standard and Deluxe editions are available both as a retail or digital purchases while the Uplay Deluxe Edition is a digital product only.

The Season Pass for unreleased DLC is available for PC users with its stated 20% savings versus purchasing the DLC individually. Additionally, players can preorder Assassin’s Creed IV: Black Flag’s Uplay Digital Deluxe Edition from the Uplay Shop for another 25% discount off the Season Pass.

Ubisoft and NVIDIA partnered in maximizing the benefits for PC gamers who use GeForce GTX graphic cards. The advanced technologies provide greater realism in the environments, combat, and cinematics such as improved light sources and shadow casting.

Tony Tamasi, Senior Vice President of Content and Technology at NVIDIA said, “NVIDIA engineers work with their Ubisoft counterparts across the globe to ensure that PC games are the best they can be – and ‘Assassin’s Creed IV: Black Flag’ is a great example of that …The end result is an unparalleled visual treat, and set to be an absolute PC blockbuster.”

For disabled PC gamers, the game may be released weeks after becoming available on current generation consoles, but the commitment to quality may provide an experience more akin to the game on next generation consoles. For Assassin’s Creed IV: Black Flag, disabled gamers have their choice of platforms for playing the game and multiple purchase options for bonus in-game content. Thus we players have choice, rather than being forced to choose what works best among the limited options available due to our disability related restrictions.