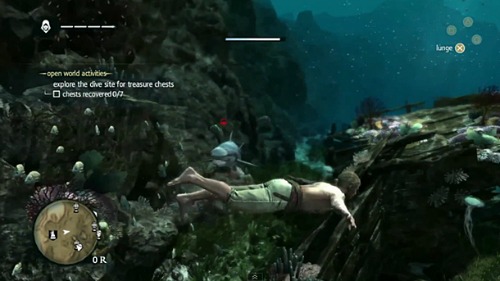 View the video via YouTube here. The game launches on October 29, 2013, for the Xbox 360, Playstation 3, and Wii U. For the Xbox One and the Playstation 4 the title will be available on day one of the new consoles’ launch.

The story is about Edward Kenway in the Golden Age of Pirates and includes the iconic figures of the historical time. The open world game allows for player decided gameplay, whether exploring new environments on land or on sea, naval combat turning the stealthy double blade assassin into a sea captain ramming ships and ordering cannon blasts, or an underwater world open for diving. Additionally, new combat features include dual-sword attacks, multi-gun abilities such as pistol swords, and a free-aim system as opposed to the previous lock-on targeting.

While hunting in the Assassin’s Creed franchise was introduced in Assassin’s Creed III, the tropical settings coupled with gameplay footage of hunting on land and sea, ship and rowboat piloting on sea as well as additional gunplay added to combat is reminiscent of Ubisoft’s fall 2012 open world game, Far Cry 3. The difference in playing such features in Far Cry 3’s first person as opposed to Assassin’s Creed IV Black Flag’s third person viewpoint will be an interesting change in perspectives when the game releases.

The 101 video highlights the old and new franchise features that are included in the upcoming game. Underwater exploration is a new feature whereas other gameplay such as hunting on land and naval combat are evolutions of previously included features. Disabled gamers who played previous Assassin’s Creed iterations have a good idea of what to expect, and new combat options are allowing for a further variety of play styles.

The YouTube link provided above does enable English closed captions. The technology remains imperfect and ranges from one word wrong in a sentence such as “riches” shown as “Richard” to entire sentences making little sense but remains better than the nothing previously provided.