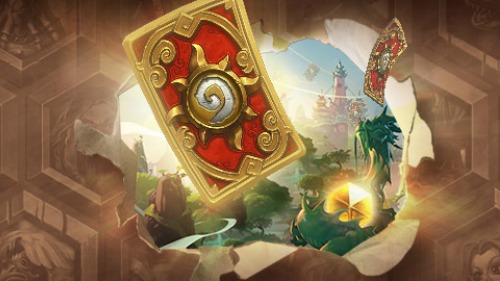 April 1, 2014 is the beginning of Hearthstone’s Ranked Play Season 1 dubbed Pandamonium. Hearthstone is a digital free to play collectible card game based on Warcraft lore by Blizzard.

While Hearthstone officially released in March 2014, the month served as Test Season 4. Hearthstoneis available on PC with iOS and Android editions in development for future release.

At the beginning of each Ranked Play Season, which is the length of a calendar month, all players’ ranks are reset to level 25. Level 25 is the lowest rank and players level up by winning matches. After achieving level 1, the highest level, players enter into the Legendary ranks. Current players begin the new Season higher than level 25 based on their rank in the previous Season. This system allows newcomers to enter ranked play against other new players rather than playing (and losing to) Hearthstone veterans.

Players who reach Rank 20, aka Shieldbearer, during April are awarded the Pandaria card back at the end of the season. The Legend card back is awarded immediately upon reaching the Legend rank.

Blizzard is watching the Legend players throughout the Seasons. Later in the year the top players will be invited to play in a grand tournament competing for the elite title, Grandmaster of the Hearth. Spots in the tournament are assessed based on performance throughout all of the Ranked Play seasons.

Hearthstone is an overall disability accessibility gaming experience. Notable accessibility concerns are the lack of subtitles (but the game is playable and understandable without subtitled voice dialogue) and the rarity of cards is color coded with purple and blue. However, as a turn based, point and click card game Hearthstone is otherwise accessible for disabled gamers. Still, the free to play business model allows all disabled gamers to play and access its accessibility with their individual disability related needs without spending any money.