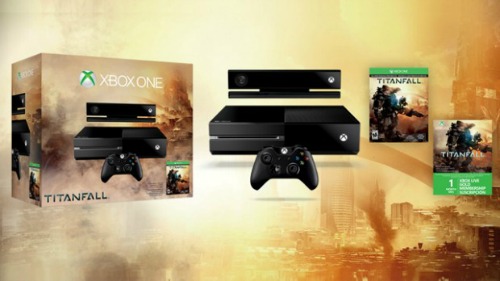 Titanfall announcements are in no short supply as the initial March 11, 2014 date approaches. Here is a quick round-up of the recent Titanfall news stories.

The newly announced Xbox One Titanfall bundle effectively provides Titanfall for free as a downloadable game along with one month of free Xbox Live acess.  On Twitter, Titanfall creator Vince Zampella (@VinceZampella) responded to a question about the game’s download size stating that on the Xbox One Titanfall requires less than 20 gigabytes.

The much anticipated Twitch app for the Xbox One is launching alongside Titanfall on March 11, 2014. The Twitch app allows for the voice command, “Xbox, Broadcast” for watching, chatting, and joining a broadcaster’s game. A much acclaimed feature is the ability to archive Twitch footage for later viewing. Other features include Kinect providing picture-in-picture video feed and audio commentary as well as a Twitch activity alert for current broadcasts. Interactions between broadcasters and watchers include watchers commenting in the text chat stream (ten lines are provided) and broadcasters can invite friends into a private party for voice chat outside of the broadcast.

Titanfall’s achievements are now posted online here and suggest standard first person shooter goals. The achievements are noticeably without obscure achievements that often results in players boosting or participating in other behavior that breaks down a match due to individual players pursuing achievement goals. The IMC Pilot and Militia Pilot achievements suggest two variations of the “campaign multiplayer” mode by unlocking after completing the IMC (Interstellar Manufacturing Coporation) and Militia campaigns respectively. Additionally, levels max out at level 50 and a reference to “generations” suggests a prestige type system where players reboot at level one after maxing out at level 50. A quirky achievement is The Gen 10 achievement obtained by “Reached the highest Pilot generation” with a prize of only the achievement itself as it’s accompanied by a zero gamerscore.

Titanfall is the catalyst for a series of changes for the Xbox One. Disabled gamers benefit with a free game bundled with the Xbox One, Twitch console access, and obtainable achievements.

A remaining question is how the Xbox One interface is set up for controller navigation of Twitch. The “Xbox, Broadcast” is a single voice command to trigger the Twitch app instantly. A similar controller input for disabled gamers who cannot use voice commands would provide the same quick access into what is anticipated to be a widely popular app.