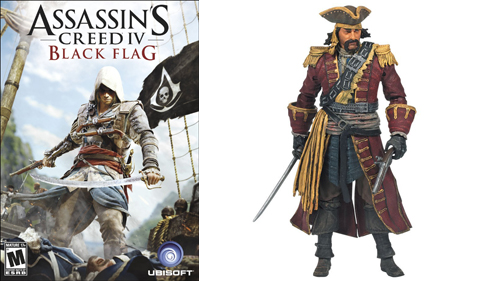 As the fall releases inch closer Assassin’s Creed 4 Black Flag begins the fall rush of cross generational games that are releasing on both the current and next generation consoles, namely the Xbox 360/Xbox One and the Playstation 3/Playstation 4. Assassin’s Creed IV Black Flag releases on October 29, 2013 on the Xbox 360, Playstation 3, and Wii U. The game releases later in November 2013 for the Playstation 4 and the Xbox One as a day one launch title for the consoles. No word is provided for whether or not the in-game content, namely Black Bart’s sails and the Hidden Mystery Pack DLC, is included in the special offers to upgrade a current generation purchase for a new generation version.

The Assassin’s Creed franchise initially floundered regarding gaming accessibility with a 2007 game that included no captions or subtitles. However, DAGER’s editor in chief, Josh Straub reviewed the most recent franchise game, Assassin’s Creed 3, as thoroughly accessible for physical disabilities. Citing contrasting colors used for visual cues, the inclusion of subtitles, alternate gameplay options to circumvent Quick Time Events, a lock picking mechanic only required for a one-time use, and forgiving free running. While the franchise can certainly continue becoming more accessible in order to address concerns such as difficulty reading the subtitles due to a small, cramped font as well as no background preventing inevitable unreadability and the lock mechanic requiring even one use of simultaneous two handed coordination. The Assassin’s Creed multiplayer is a unique and particularly accessible multiplayer mode often rewarding players for thoughtful stealth more so than for twitch reflexes.

Is the Assassin’s Creed franchise an enjoyable and accessible experience for you?

Are you purchasing Assassin’s Creed 4 Black Flag? On what platform?

Is the Lethal Pirate upgrade worthy of the $10 cost?