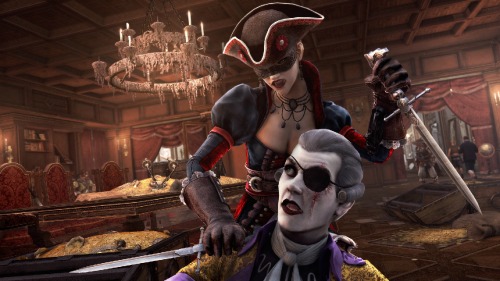 I think that the Assassin’s Creed multiplayer experience is one of the most accessible such experiences for gamers with fine motor impairments or visual impairments. Here are some tips and a video of a recent match of mine to get you started in the Animus. The basic rules of the multiplayer are this: You have a target, and you are another player’s target. Your goal is to identify your target and kill them while evading the player that is hunting you.

Don’t be afraid to “cheat.”

Those of you familiar with the Assassin’s Creed multiplayer may notice that I have some abilities that are not usually available for players of my level. I unlocked these particular abilities by purchasing them directly from Ubisoft by using Eurido credits. Sure, it’s a cheap way to get ahead in the game, but for disabled gamers, it’s so critical that we get the skill sets assigned to our profiles with the exact skills we need if we want to get ahead in this game. So, don’t be afraid to “cheat” if you have the money to unlock the abilities ahead of time.

Take full advantage of the profile customization.
The other thing you’ll notice is that I’m bumbling around in my profile settings right before the match starts. This is because I’m trying to get the special ability that I use most (poison) assigned to the bumper that is most easy for me to reach. I hit the wrong button, however, and I wasn’t able to do this before the match started, and my performance suffered accordingly.

The persona you choose matters.
The persona I chose for this match (and most matches) was the Dualist. This may be just my opinion, but it seems like the character you choose matters. I like the Dualist because (apart from the white clothes) he is not very memorable. He’s got nothing on his face. He just looks like a vanilla character model, which seems to make him harder to pick out from long distances. But that’s just a theory.

Stay alert.
Stay alert. The Assassin’s Creed multiplayer is built around the idea that if someone is good, you’ll never know what hit you. So the only way to be defensive is constantly to be aware. If you see someone that might be trying to sneak up on you, move away. If you see a player crouched on top of a wall, don’t walk underneath them, even if it is the quickest route to your target. It’s not worth the gamble that that person is actually hunting you.

Accept that you will get killed.
You are going to die. That’s just the nature of Assassin’s Creed multiplayer. It’s important not to get discouraged. Even if you drop down to eighth place, it’s still always possible to claw your way back up to the top.

There’s no substitute for quality.
The reason that it’s possible to climb the ladder so quickly in the match is because this game puts a major emphasis on quality over quantity. If you’re not getting kills, just slow down, take time to set up a kill using one or two of your abilities in order to score high and compensate for the lack of volume.

Take your time.
Speed can kill you in Assassin’s Creed multiplayer because none of the characters that look like you will be dashing around the map. Take your time and remember: It’s quality of kill over quantity.

Take advantage of other players’ mistakes.
The neat thing about Assassin’s Creed multiplayer is that it really is a study in how individual players act. You’ll learn that it’s very easy to make mistakes in Assassin’s Creed, especially if you are being hunted by someone who knows what they are doing. If you are the hunter, be sure when you are staking a player that you are always close enough to take advantage of a mistake like I did when my target stunned a civilian, opening him up to poison (2:20 in the video below).

After you make a kill, clear the area as fast as possible.
It may be tempting to stick around and watch your opponent writhe on the ground after you’ve stabbed him, but remember—you’ve just committed at high profile act, and if the person who is hunting you saw you, the odds are they are trying to make a b-line toward you to return the favor. So as soon as you make a kill, clear the area and blend back into the crowd as soon as possible.

Vary your pace to throw off your pursuers.
You’ll notice at multiple points in the video below that I stop and just blend in to a crowd of bystanders. This is because the people who are hunting you expect you to keep moving. They might be tracking you from across the map, and if you stop and kill a few seconds, the odds are you’ll lose any pursuers who are keeping visual tabs on you.

You won’t win matches by rushing.
There are opportunities for players to run across the map and score cheap points by kicking downed targets in the head, or quickly dispatching stunned players. But the reality is you won’t win an Assassin’s Creed multiplayer match if you rush.

Don’t forget that you have a long-range kill option.
At one point in the video below, you’ll see me score a kill with a silent blow gun. I resorted to this option because I realized that my target was too far across the map for me to reach without revealing myself. At times like these, it’s best to rely on your ranged-kill option. Lock onto them with the left trigger and use the long-range weapon that is mapped to triangle.

Check the score often and let the score set your tempo.
You’ll notice that every time I die, the score pops up. This is not automatic. This is me checking the score. This is because the score should be what sets the tempo. Check the score often to see how much of a difference you need to make up to be in first place before the match ends. Always keep in mind that it’s best to set up high-value kills. But if you don’t have the time, go for quick and dirty.

Don’t be afraid to be obvious when necessary.
At about eight and half minutes into the video below, you’ll see me get killed by what might be the most obvious player of the whole match. The reality is, I saw him but I didn’t want to blow my cover by running away. I slowly walked away, and it cost me. I was afraid to be obvious, but you shouldn’t be.

There is no substitute for experience.
There is a pivotal moment at the end of the game, when I stun a clumsy pursuer who revealed himself to me. I was able to do this because I knew the limitations of the game, and I gambled that I would be able to stun him before he could lock on to me and kill me. I also did as well as I did in this match because I knew the Portobelo Map and the best ways to navigate it. This should show that there’s no substitute for practical experience playing the multiplayer.

Have fun.
Remember, you are playing a game. So if you are not having fun, you are definitely doing it wrong.

I really enjoyed doing this article. If you like it, tell me in the comments below.