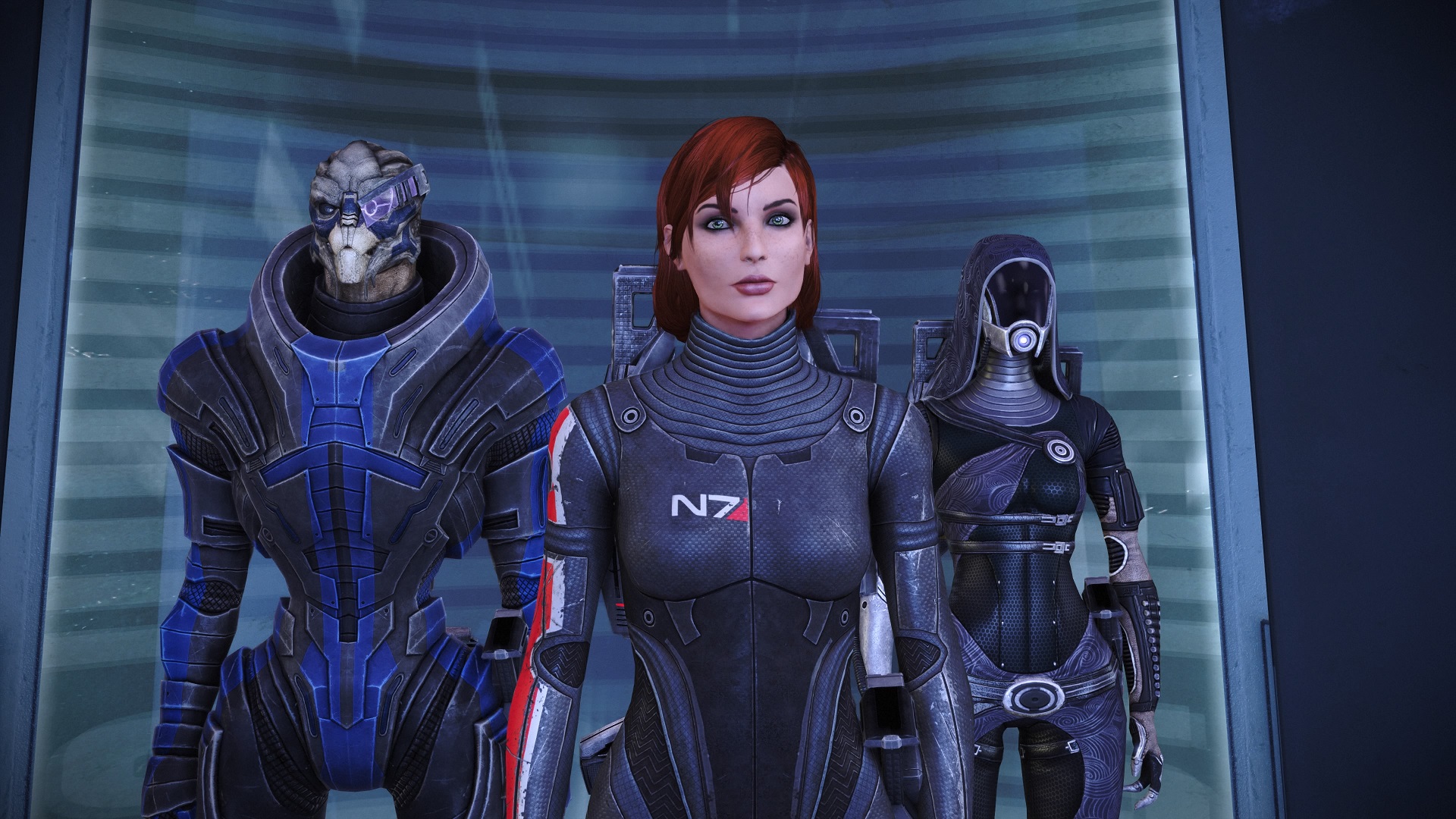 Play as your very own Commander Shepard again, and try to save the universe from the Reaper threat! Mass Effect Legendary Edition is an HD remaster of all three games in the main trilogy. It’s published by Electronic Arts and developed by BioWare with help from Abstraction Games and Blind Squirrel Games. The series has third-person shooting combat with paragon and renegade narrative choices that carry over throughout the entire playthrough of all three games. This remaster has significantly upgraded visuals, technical improvements, and even a few much-needed accessibility options.

Mass Effect Legendary Edition (abbreviated as MELE going forward) keeps most of the gameplay and combat intact from the original games. Combat consists of shooting from behind cover while fighting a variety of advanced robots and aliens. As uncharted planets are explored, players will meet new companions to help them on their journey.  The appearance and background of the main character, Commander Shepard, are able to be created and customized.  While playing, details like the number of enemies defeated, planets explored, and missions completed earn experience points that help players gain better abilities and increase their reputation. Later on, other things like resource management and obtaining War Assets become more important and play a factor in the endgame.

Most of MELE’s improvement involves visual touch ups, but there are also a few noteworthy additions to the accessibility of the series. For transparency, I’m reviewing the PC version of this remaster. Navigating menus and accessing the accessible content can be a bit tricky when playing MELE, but just know that there are customizable options that affect all three games as well as each one individually. When first starting up MELE, the new “unified launcher” appears, which has settings that affect all three games. There are only a few options in this menu, while the rest can be found in the individual options menus for ME1, ME2, and ME3.

For disabled gamers with fine-motor impairments, there are significant changes to gameplay and combat. In ME1, Shepard can now sprint outside of combat. Controls are completely customizable again, but this time around the melee function can be mapped to an individual button command. All squadmates can now be controlled independently if preferred (you could do this in the original versions of ME2 and ME3, but now it’s available in ME1). Combat has been rebalanced to be less challenging, and there’s now additional cover in the environments. The biggest upgrade has to do with the vehicle controls, specifically the Mako (and to a lesser degree the Hammerhead in ME2). The shuttlecraft controls much better than it ever has before. Instead of forcing one to use the keyboard directional keys in tandem with the mouse, the camera and directional controls can now both be used with the mouse. For me, this meant that I could drive and shoot with just a mouse. Also, lava no longer instantly destroys the vehicle. Instead, it will deal damage overtime, which is shown by a damage bar that appears on-screen. This made things much less frustrating, and I actually enjoyed traversing the terrain of different planets in the Mako.

Unfortunately, those are all the main accessibility options available for gamers with fine-motor impairments. Any issues with difficulty and aiming from the original are still prevalent here. I read that EA claimed to improve the aim-assist throughout the series in MELE, and I can only assume they meant they would tweak the passive “aim-assist” mechanic that already existed in the game engine. There’s no way to turn on a separate aim-assist function in any of the options menus. Other than a few heat-seeking weapons, I didn’t notice much of a difference with the aiming, except there was a noticeable change in ME3. When firing at enemies in the third game, shots were more accurate, and enemies took damage as long as shots were fired in their general vicinity. Be aware that ME2 focuses much more on combat and changing ammo, just like the original. I suspect disabled gamers will have the most trouble here dealing with fast movement and tougher enemies. I also recommend turning on Active mode. This will help take the pressure off of the player, so that their squad will handle enemies more often. Thankfully, the different difficulty options from the original are still present. Casual, Normal, Hardcore, and Veteran difficulty options are available for gamers who need support depending on their level of mobility. However, in ME3, the Casual mode is much more nuanced. Choosing this difficulty automatically focuses the game on narrative and less on combat. I highly suggest disabled gamers pick this difficulty as it makes enemies weaker and gives players and their parties more health.

There’s a complete overhaul of character models and environmental textures for this remaster, but as far as accessibility options for the visually impaired are concerned, there’s not a lot to report on. The brightness slider can be changed in the options menu of all three games. MELE has a new Resolution mode that changes the resolution to favor quality or framerate, as the player so chooses. Colorblind players may have some issues dealing with the hacking minigames, specifically in ME2. Most of the hacking has to deal with matching symbol patterns, but sometimes there are color-signifying patterns as well. The majority of the hacking is an optional minigame to gain extra currency, but when forced to hack for the main story missions, players always have unlimited attempts to complete the objective. Still, some players with visual impairments may have trouble hacking. Deaf players will be happy to know that they have more options when it comes to the subtitles in MELE. The unified launcher provides the option to change the audio language and the subtitle sizes for all three games. The sizes can be altered to small, medium, and large subtitle fonts. More subtitles have been added to cover background dialogue and ad-libbed lines that weren’t subtitled originally. Sometimes it’s not consistent (especially in ME3), but all the important subtitles for story dialogue are present and easily readable.

Mass Effect Legendary Edition brings back all the unique characters and sci-fi lore that fans know and love. Vehicle controls have been significantly improved, so gamers with fine-motor impairments will have a much easier time. There are a few options for subtitle sizes, but colorblind players may encounter barriers with the color-signifying aspects of the hacking mechanics. Although nowhere near perfect, this remaster is the definitive edition of the Mass Effect trilogy, and it does give disabled gamers a few more options overall.