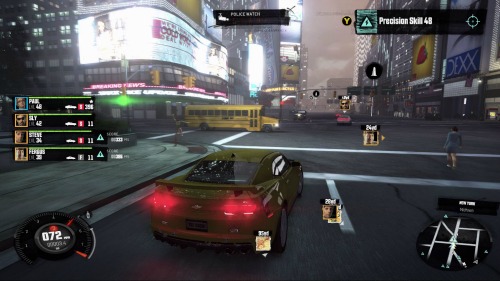 The Crew is a brand new racing IP from Ubisoft. Although it’s not slated for release just yet, we at DAGERS got some hands on experience with the beta version, and are excited to tell you that from the stand point of accessibility, The Crew seems very promising.

For starters, the whole reason that we’re writing this preview is because Ubisoft contacted me and wanted help making the game more accessible for players with all disabilities. This shows that Ubisoft is dedicated to trying to include as many gamers as possible in this new experience and speaks well not only of The Crew, but also for the accessibility of future Ubisoft titles.

From the standpoint of auditory accessibility, the beta version had nothing which relied on sound, and comprehensive subtitles throughout the cutscenes that tell the story of a racer trying to avenge his brother and take down a dirty FBI agent, and the leader of the 510s, his brother’s old racing crew. While these types of games aren’t historically known for their storyline or voice acting, The Crew sports impressive story driven cutscenes, which thanks to the comprehensive subtitling, are completely accessible.

From the standpoint of visual accessibility, the crew fairs even better, because it includes not only elements such as a scalable HUD map, but also the extremely accessible feature of an overhead route guide. This means that instead of having to follow a hard to see mini-map, players will be able to follow a line in the sky that will always guide them to the next story driven mission. This combined with the fact that The Crew doesn’t seem to rely on color coding or fine detail, and uses easy to read text, seems to indicate that even gamers with visual disabilities should be able to enjoy this game.

But where The Crew really shines is in its fine motor accessibility. While it is true that racers are some of the worst games from the standpoint of fine motor accessibility, The Crew compensates for this inherent issue by providing features such as extremely forgiving gameplay, which allows players to restart a mission at any time, or even skip certain missions entirely, and heavy emphasis on choice. For example, in the beta version, players were only allowed up to level 10, and yet there were still dozens of missions available, all playable at the same time. Beyond this, The Crew sports an in-depth car customization system, allowing players to maintain a stable of cars, each one tailored to a specific race or play style.

The bottom line is, I went into the crew wary of its accessibility, but given both my experience in the game, and my experience working with the people at Ubisoft, I have extremely high hopes that this game will be enjoyable not only for able bodied gamers, but for much of the disabled population as well.