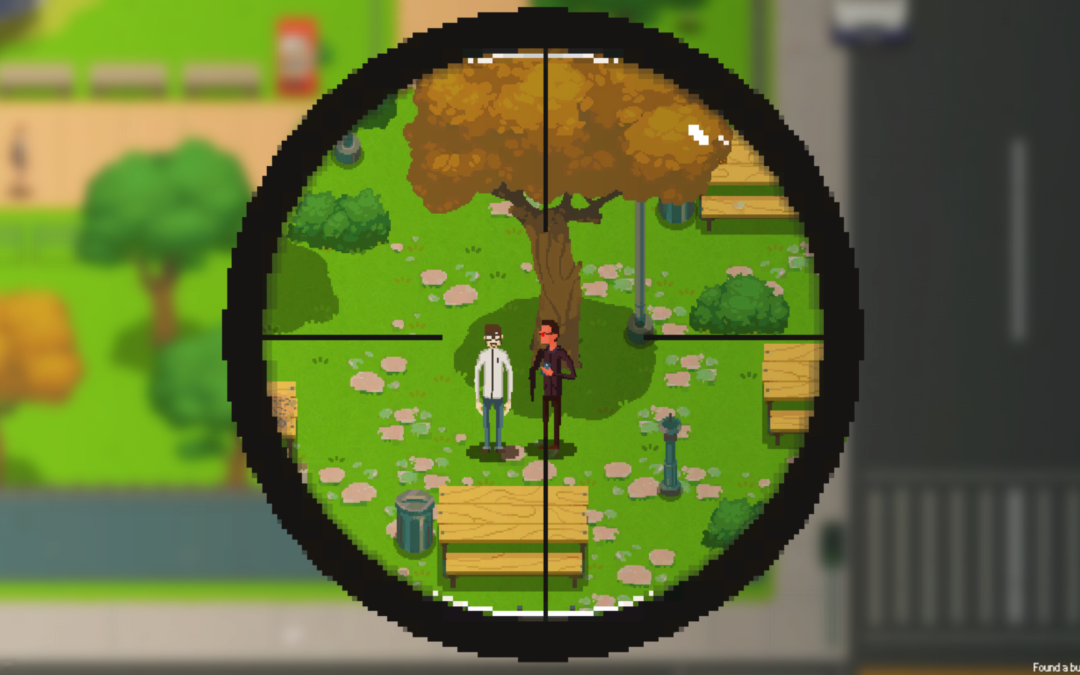 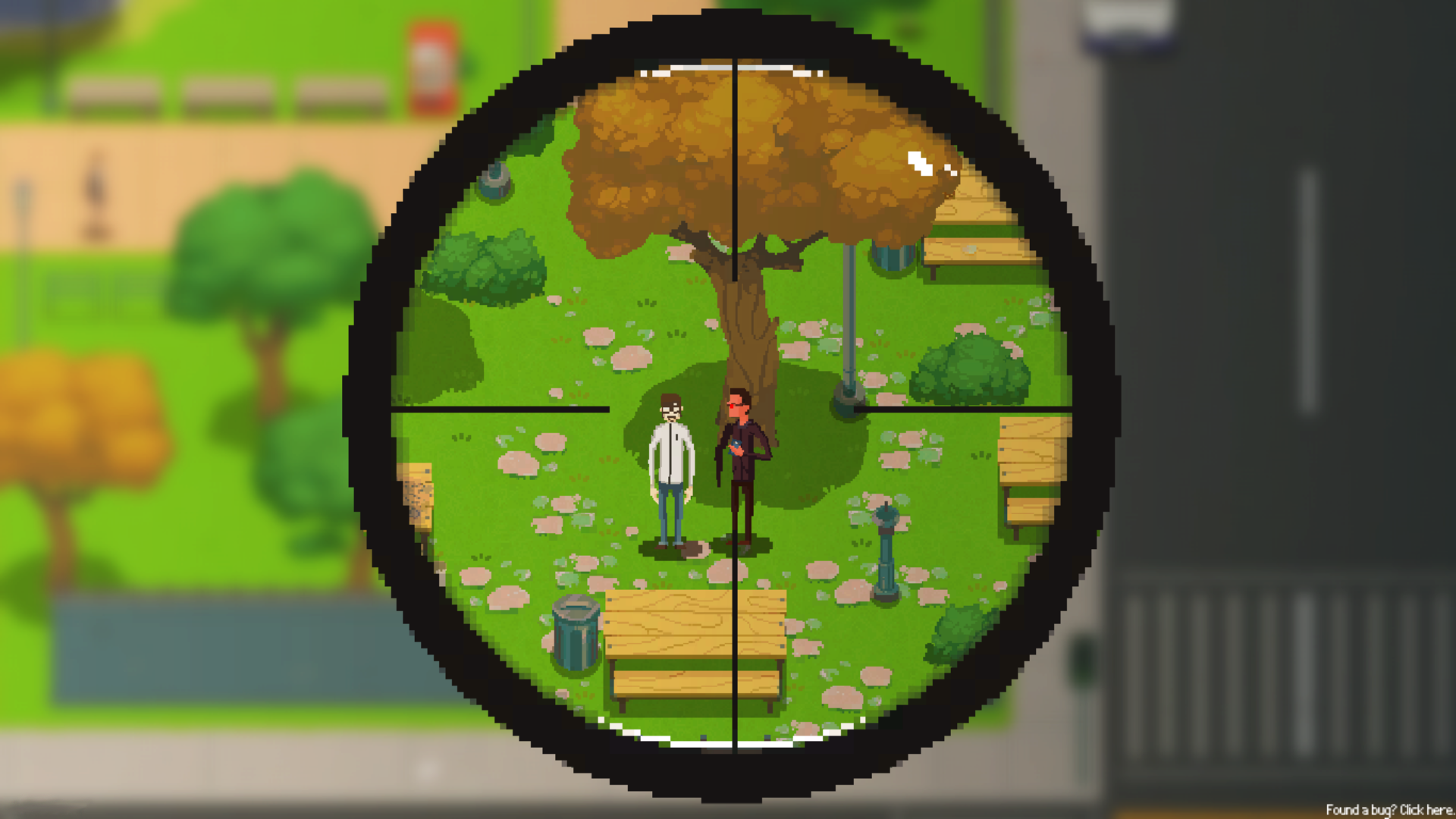 So I am a big fan of the John Wick movies. They’re fun, loud, and full of stylized action. However, the movies are very over-the-top and they tend to have a very serious tone. Much to my delight, the game Shots Fired attempts to spoof the John Wick movies, as well as the movie genre itself. The game is full of pop-culture references and humorous commentary on the hitman archetype. Shots Fired is a point-and-click game developed by “Another Indie” studio and is set to be released in the next few months. I was given the chance to play a beta of the game, so I’ll express my initial experience with it. Shots Fired begins with the main character’s wife brutally murdered by assassins, his daughter kidnapped, and also his TV was stolen. The TV seemed to be the catalyst that pushes him to get revenge and pick back up the killing career he thought that he left behind. Shots Fired plays like a hired hitman simulator. You’ll be using a sniper rifle to hunt down targets and earn money, getting you closer and closer to the main syndicate that killed your wife. The core of the gameplay is very similar to a GTA hitman side mission, albeit using traditional point-and-click controls. Left clicking on the mouse will let you access in-game menus, interact with objects, and shoot your target. Right clicking lets you zoom the camera. A smartphone device within the game itself gives you access to most menus and options. The game does a good job of streamlining the experience with the smart phone, giving you shortcuts to gameplay elements displayed as Apps on the screen. So the smartphone essentially lets you escape the game, change options, and check your inventory; simply by clicking with the mouse. As a disabled gamer with fine motor skill impairments, maneuvering the controls is where I have a few concerns. Although Shots Fired lets you use the mouse to interact with most things, there are several important moments where you are required to press the keyboard keys. For instance, when finding targets in the city you’re usually on top of a building looking down. There is only so much of the map available to you without pressing W,A,S,D on the keyboard to survey the area. You must also press these buttons during getaway scenes. When you finish killing your target you have to escape the area quickly. Shots Fired, indicates this through a car chase minigame on the smartphone device. Unfortunately, you have to press W,A,S,D to navigate your car through traffic before the cops get you. I was never able to complete these minigames successfully because I can’t physically press the keyboard keys. It’s not game over if you fail these, but you lose money to pay your bond and must start the mission over. It’s a shame because most of the game has a traditional point-and-click style except for these parts. I think it’s fixable though, and I have a few helpful tips. The camera is pretty easy to improve. Since they already allow the mouse to maneuver the camera, they could simply give the mouse control less barriers and expand the reach to the entire map. As for the getaway minigame, I suggest putting an overlay of the W,A,S,D keys on the screen so that you can use the mouse. The rest of the screen is pretty barren during these moments, so it wouldn’t take up much space. Until they tweak the controls, disabled gamers with fine motor skill impairments may have a few roadblocks when playing Shots Fired. Disabled gamers with hearing impairments should have an easy time. There is no spoken dialogue in Shots Fired. Technically, there’s some screaming and gunshots for dramatic effect in the opening cut-scene, but the setup can be understood without subtitles or captions for these brief moments. The rest of the game has scrolling text for every line. The font on some of the smartphone apps can be a little small and hard to read, but usually the dialogue has large, dark text on a bright background. You can also change the master volume and music volume individually in the options menu. Those with visual impairments shouldn’t have too much trouble. Shots Fired doesn’t have a brightness slider, but the game is fairly bright as is. I also didn’t notice any color distinguishing options or applications, so colorblind players won’t have anything to worry about. Shots Fired has a lot of potential and I love that the story has a bunch of self-aware humor and doesn’t take itself too seriously. I don’t normally see point-and-click games go in this direction, and it is pretty cool to see a game that uses the mouse as a weapon. Disabled gamers with fine motor skill impairments may have trouble during parts, but if the developers address the keyboard issues, I think the game would be easily playable. The subtitles are nicely implemented for deaf players, and colorblind players won’t have any obstacles. I’m looking forward to seeing what the full game will be like. It should be a bloody good time.