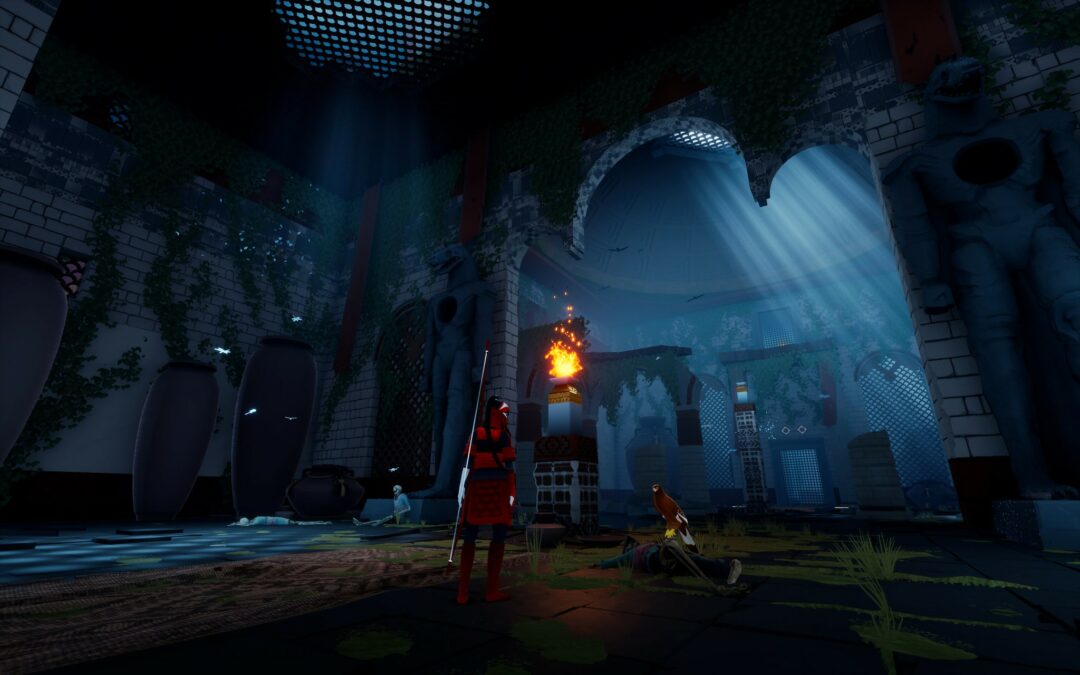 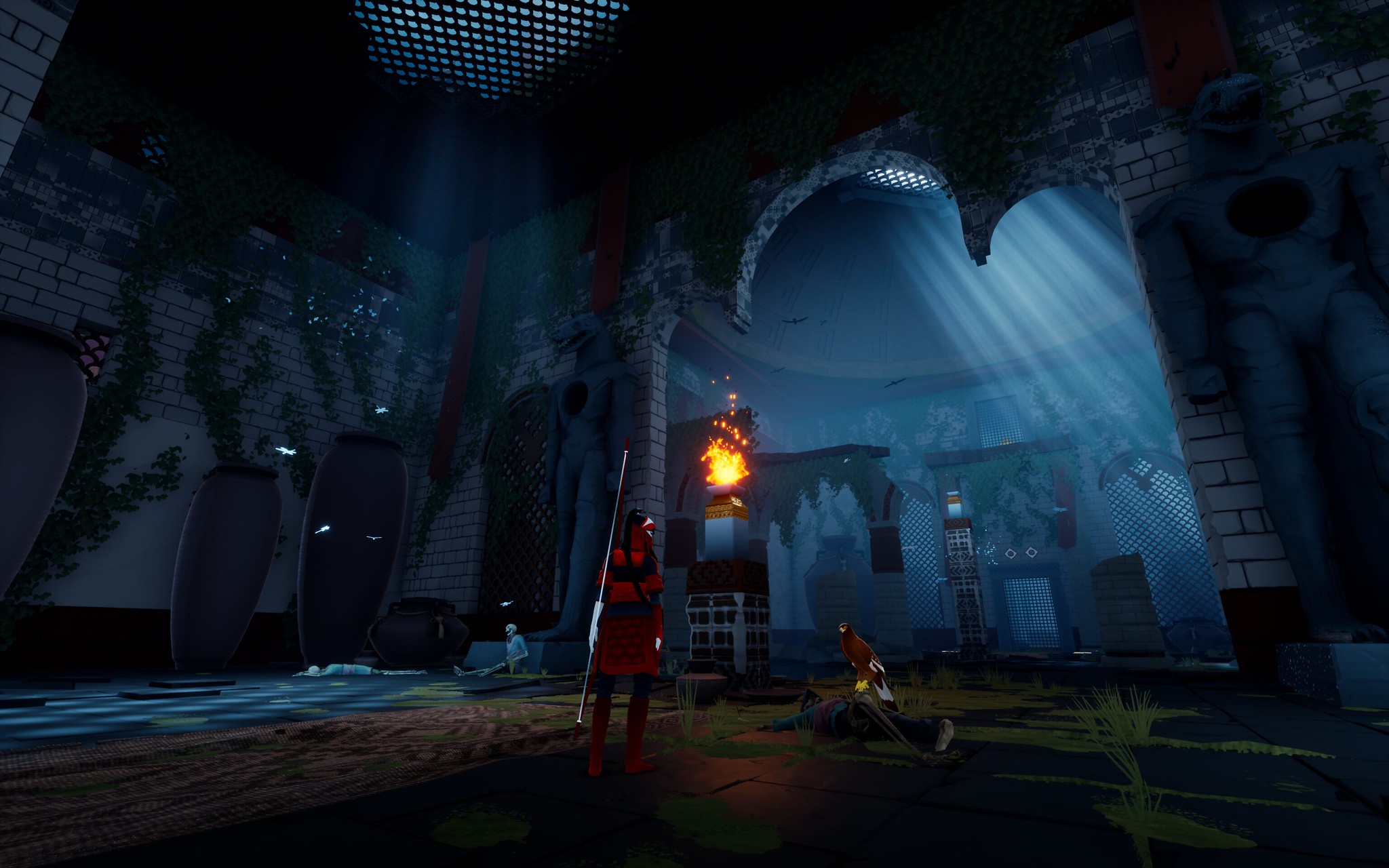 Giant Squid is a development team made up of thatgamecompany veterans, and their first game Abzu managed to live up to TGC’s best. There, the player explored an underwater world, and like Journey, there wasn’t much of a narrative, but a lot was provided through context. In every adventure, there were obstacles to overcome, sometimes with help in the case of Journey’s passive online play, and other times without it as players went at their own pace. Since Abzu, we’ve seen a rise in narrative-driven games that aim to tell their story through passive means while games like the Ori series also mix in some explicit narrative, but they largely leave the player to interpret the game’s events as they wish.

Ever since it was shown off at the 2018 Game Awards, The Pathless has shown that Giant Squid wants it to be a more action-centric affair and one that still has roots in games like Journey but can go beyond that style to tell a grander tale. Abzu’s water-filled adventure was the beginning of this journey, and The Pathless is a more in-depth gameplay experience with a similar approach, offering something that delivers a much faster pace in moment-to-moment action while still providing plenty of chances to soak in the scene.

As a masked hunter, this adventure begins with washing ashore on an island only to see that it’s enveloped by darkness. The Pathless doesn’t pit a swarm of enemies against the player, but there are still many targets to shoot with the hunter’s bow and arrows. Holding down L2 to dash and R2 to draw the bow while jumping around with X allows for navigation and ranged combat with great ease.

Everything about the movement is fluid, from running to jumping to nailing targets with arrows and dashing in mid-air after a successful shot lands. There’s a flow to the combat, and it carries over into the puzzle sections as well. Once the darkness is vanquished from an area by finding a few objects to open up a clear path, an eagle companion joins the journey. Yes, you can pet them for as long as you want, and not since the cute little gray kitten’s debut in Shenmue has a player-animal bond been so strong in the early game.

The Pathless features a mix of three distinct gameplay types. There’s fast dashing mixed with quick arrow shots alongside eagle partnership sections that involve both flying around with the eagle and using it to solve puzzles. The puzzles are Zelda-esque environmental pieces where the eagle moves things around the world, oftentimes allowing the hunter and the eagle to move simultaneously. The eagle can also take out foes from above, offering a visceral thrill.

The Pathless’s puzzles and stealth allow players to slow the pace down, and throughout the adventure, large red areas fill the land where the boss resides. Players go from the thrill of fast action to a sense of terror and dread as the boss battle looms. There, evasion is key until reunited with the eagle, which enables an escape. Bosses have several stages, and taking down a tower helps weaken the foe before engaging in direct combat, where they’ll deal out all manner of flames and fury. Trying to avoid being seen early on in battles is thrilling, as one false move leads to being caught, adding a sense of terror that no Giant Squid or thatgamecompany production has had yet.

In playing the game on both the PS4 and PS5, I found that it controlled like a dream on each, with my PS4’s Pictek controller really making the trigger-based actions more engrossing than a normal DualShock. That holds true with the DualSense, which does wind up offering a more tactile feel to bringing back the bow and features some minor haptic motor functions during jumps to help feel how high you’ve leaped. With that said, it isn’t an absolute must-have part of the experience, so playing on the PS4 won’t leave players feeling like they missed out much.

Visually, the game is largely carried by bold colors and an art design that scales nicely. Given that this is a game designed for Apple Arcade and brought to PC, PS4, and PS5 later on, it makes sense that it’s not exactly going to push graphical boundaries; however, it still looks great. Both the hunter and the eagle have slick animations that look realistic and smooth while still offering a distinct visual style that’s right at home with Abzu but manages to stand out on its own. The environments are richly detailed with lush grass and bright colors adorning all parts of the world. On the PS5, you do get better-looking reflections, which make boss battles a bit more exciting and immersive. It’s an impressive-looking game in many ways, even if it isn’t going to be used to showcase a new 4K TV.

As with other Giant Squid games, it has strong sound design, and its soundtrack, sound effects, and environmental audio impress from beginning to end. The soundtrack is relaxing when it should be but truly shines in boss battles. Here, having a soundbar or a great headset can help with target acquisition. Being able to tell where they are via audio instead of just relying on visual cues can turn the tide in a particularly difficult battle. It’s easy to see a lot of care was put into each part of the sound design, and it pays off with music that fits each scene but doesn’t wind up being quite as pitch perfect as Journey due to this being a more free-flowing game instead of the interactive cinematic approach.

From an accessibility perspective, The Pathless is in a tough spot, as it is both a fast and slow-paced game that tries to meld various genres together. From a visual point of view, it succeeds at offering large text by default, and all of the game’s fictional language is paired with large subtitles, which should be a boon for deaf and hard-of-hearing players as well. The soundtrack is never described with text, and it could benefit from descriptions like the sound of wind whistling by the player. The Pathless could definitely use a colorblind mode given how rich and sometimes low contrast its colors get, and visual cues like directional arrows or a different color option for the hunter’s garb instead of red would be nice since it can blend in with the red lighting and would help during boss battles.

From a fine-motor perspective, the fast motion doesn’t lend itself very well, but it isn’t an enemy-filled game, so players can still enjoy the puzzle-solving and exploratory parts of the game. A skip option or cinematic mode for boss battles would be nice as well, but maybe that kind of thing will come along later alongside a developer’s commentary, as those have been fairly popular post-launch additions for games like this before.

Overall, The Pathless is a fantastic game but one that has some room for improvement for players with disabilities. It’s a stunning, fast-paced adventure that keeps you on your toes with both quick bow and arrow combat and exciting and tense boss battles with terror lurking at the slightest misstep. Its animal companion implementation is some of the best in the industry and made me truly care for both the hunter and the eagle as their journey unfolds. I was along for the ride, and it’s a thrilling experience at all times in one way or another. Anyone who loved Journey, Abzu, or even Flower will find a lot to like here.