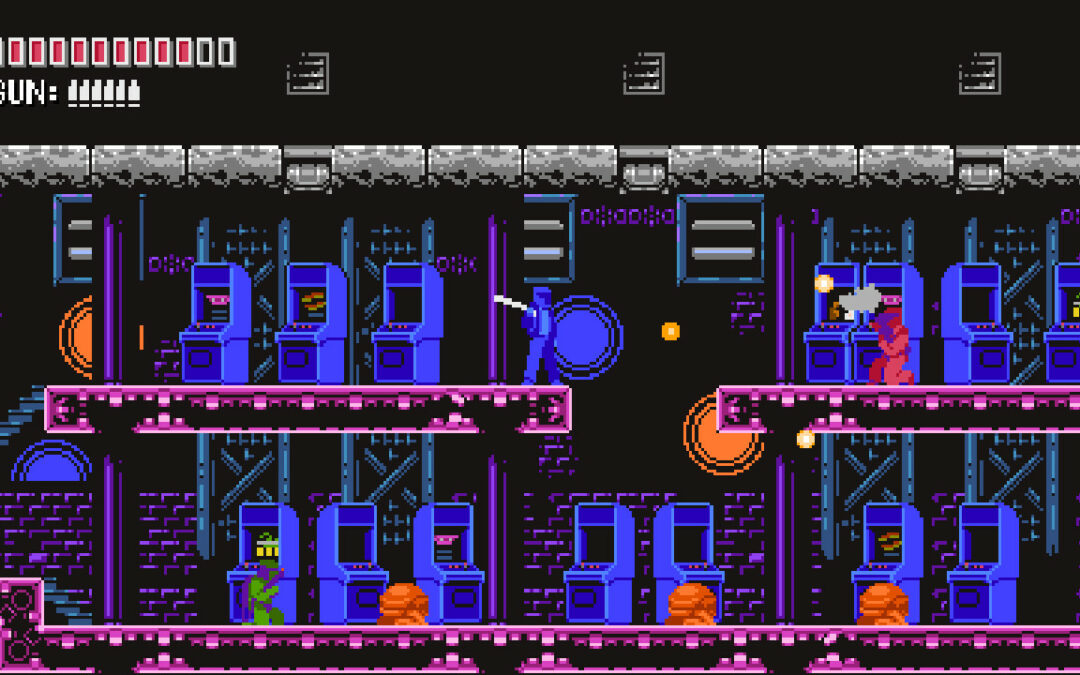 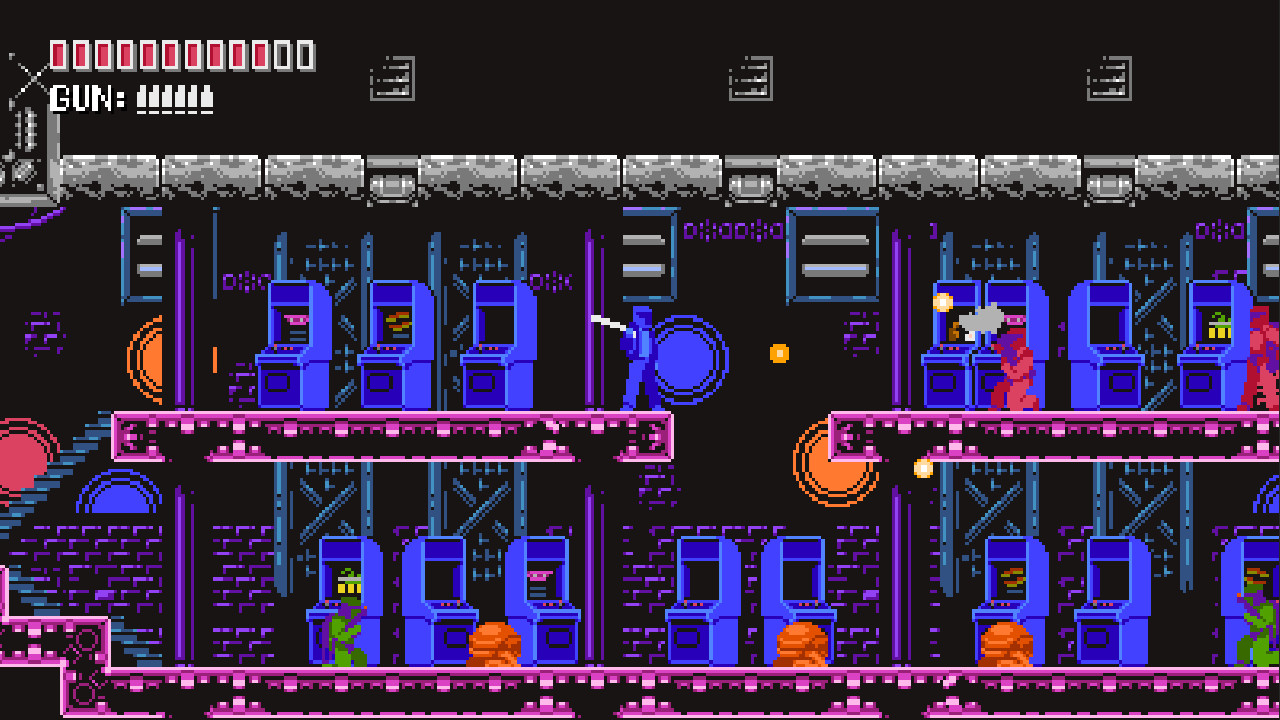 It’s often said that what’s old is new again, and we’ve seen a revival of 8-bit style games in the past decade and beyond. They’ve gone from retro-chic to old hat to being revived once again with games like Shovel Knight bringing back the art style with a level of detail not typically seen in that era. There haven’t been many that truly feel like they could’ve been released in the NES days, but Street Cleaner: The Video Game is just that kind of adventure. Inspired by a synthwave group called Street Cleaner, it has a pretty cool concept as the game is “inspired by” a fictional movie, which itself would be a takeoff of a slew of Arnold/Sylvester Stallone ’80s movies. It was an era fueled by extremes, and both violence and muscles ruled the day along with some film archetypes that wound up bleeding into gaming.

The Contra series wore its ’80s influences proudly, while games like Batman showcased some of the best of what a licensed property could do with the right development team behind it. In a sea of low-grade THQ and LJN-branded games, companies like Sunsoft at least aimed for the stars and reached the moon. After Batman, they replicated that kind of success with Batman: Return of the Joker, but few other licensed properties received a lot of care. Creaky Lantern Games has nailed a lot of little things to make Street Cleaner look and feel like an NES game, only one without any flicker or technical problems. However, the biggest thing they have done is make it the most accessible platformer I can recall.

The sheer amount of customization options to increase the user-defined experience is impressive and something all retro-inspired game developers can learn from. From a simple menu with bold white text on a black background, users can choose to have unlimited ammo, a double jump for easier platforming, turn off respawning, and turn on invincibility. Essentially, players have most of the benefits of a baked-in Game Genie-style device or modern-day emulator from the start. Players don’t have to beat the game or kill a certain amount of enemies to unlock invincibility–all of this freedom is available from the get-go.

Turning unlimited ammo on changes the game from a short-ranged affair akin to Ninja Gaiden into a mix that includes long-range gunplay. It feels a bit like Contra mixed with Ninja Gaiden or like a Contra ROM hack with Mega Man Zero-style short and long-range action. Turning it off turns the player’s mindset toward defense, making them more versatile. Turning off respawns helps ensure players aren’t overwhelmed by foes if their avatar flies off screen and can make the game’s few tricky platforming sections more enjoyable. There are no insta-kill surfaces here, but there is concern about going from one floor to another and losing time, making mistakes fairly easy to handle when it comes to platforming.

This is fantastic for anyone with a fine-motor impairment, as they can enjoy the adventure without having to worry about deaths from platforming, and thanks to invincibility they can truly get through the game without the requirement of mad platforming skills. This means there are effectively no barriers in place to beating the game, which is remarkable for any game let alone an action platformer with an NES-era inspiration. When “NES hard” exists as a legitimate description of game difficulty from that era, and developers can retain everything that worked so well about those games while modernizing the experience so anyone can enjoy it, the experience is a special one. It’s rare to think of a game as being thoughtful and considerate, and yet here we are–players have so much control over their experience and can dial it back bit by bit until they find their desired speed level.

There are many anti-frustration features baked in that act as quality-of-life improvements across the board. Players can turn the assists on or off at any time via the pause menu, so when they encounter a tough section, there’s always the option to turn invincibility on to get through it and turn it off right after. Playing without respawning is a nice way to balance ease of use with difficulty, while turning on double jumps helps evade enemy fire, and infinite ammo turns it into more of an offense-forward experience. This level of versatility is unmatched, and not even Shovel Knight, with its scaling difficulty keeping things tough but fair, can come anywhere near Street Cleaner when it comes to being an accessible faux-retro game.

Armed with a baseball bat and a gun, Jack Slade isn’t just perfectly named, he’s decked out and ready to take on anyone who dares cross his path. Players have a wide variety of native controller methods available and can tailor the on-screen prompts to match an Xbox, Switch, or PS4 controller right out of the gate. Melee combat is quick, and the bat has a surprisingly long range while offering a satisfying feeling when swinging it. Mixing in gunplay makes the game feel almost like a blend of Power Blade and Mega Man Zero. The former had minimal platforming to worry about, while the latter let players go with short-range or long-range combat on a whim depending on the environment.

Street Cleaner feels like a highly-polished NES game running on better-than-NES hardware, as there’s no slowdown and a lot of color depth. The graphical design of the environments is very industrial with some urban settings thrown in as well. The pixel art for the characters is heavily focused on colors. The player character is bathed in blue, and enemies vary from neutral colors to bright outfits that help them stand out more. The stage color schemes are right out of Batman: Revenge of the Joker on the NES, with a lot of color gradience that wasn’t seen much on the NES outside of Sunsoft’s best efforts. One area Street Cleaner could improve upon is the lack of colorblind options given how heavily some characters are bathed in a particular color, but since all of them are a fair distance away from the player at some point on screen, I don’t see it as a major barrier. It’s certainly something that would make the game more accessible though.

Street Cleaner’s soundtrack, as expected for a game rooted in a synthwave band, is tremendous. The chiptune soundtrack is fast, catchy, and yet also has a surprising amount of world building in its design. Not every moment is saturated with sound like many 8-bit classics. Instead, while most of the game plays out with music, silent sequences are sprinkled in to build suspense. Audio cues play a large part in avoiding enemy fire, as shots are audible from above before they can be seen, offering a chance to avoid them before they come near Jack. There are some sweet little Easter eggs tied into the audio like petting a dog resulting in a happy heartbeat from the pup. While there are no visual cues for the music, there are cues for things like the heartbeat and projectile attacks.

Street Cleaner: The Video Game is one of the finest faux-retro platformers ever made and among the most immediately accessible platformers I’ve experienced. It’s a well-crafted game first and foremost but also one that sets out to be playable by everyone with a wide variety of customization that winds up being great for accessibility. There’s a bit of room for improvement when it comes to colorblind accessibility, and some kind of captions for the music would be nice. Still, for a throwback NES-style platformer, it goes far beyond any 8-bit game I can recall.