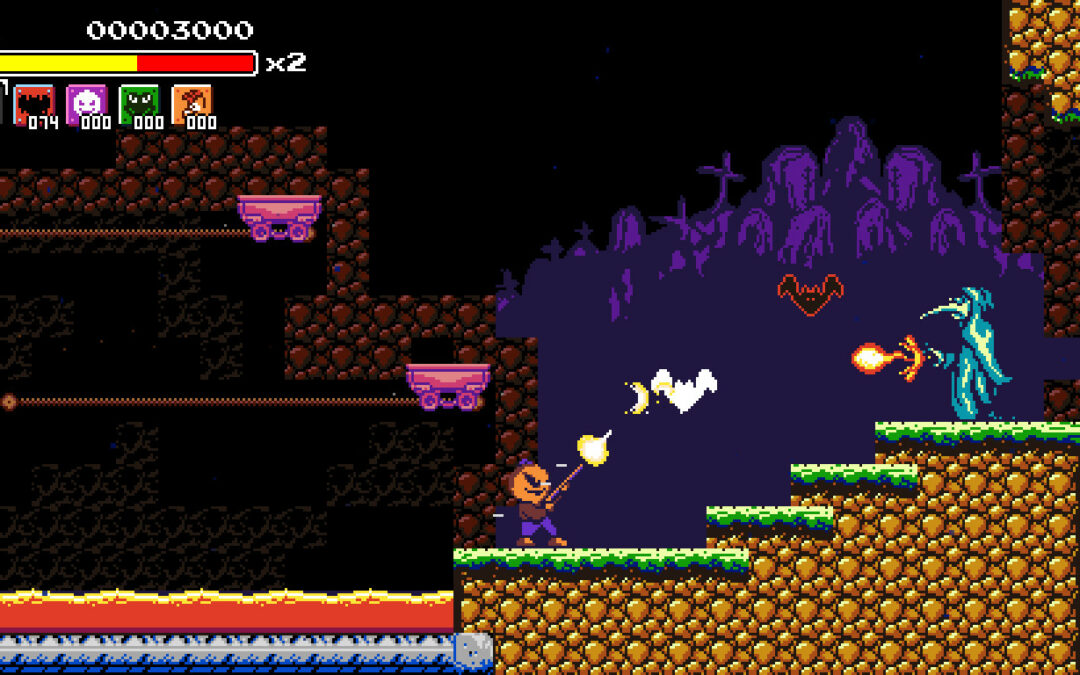 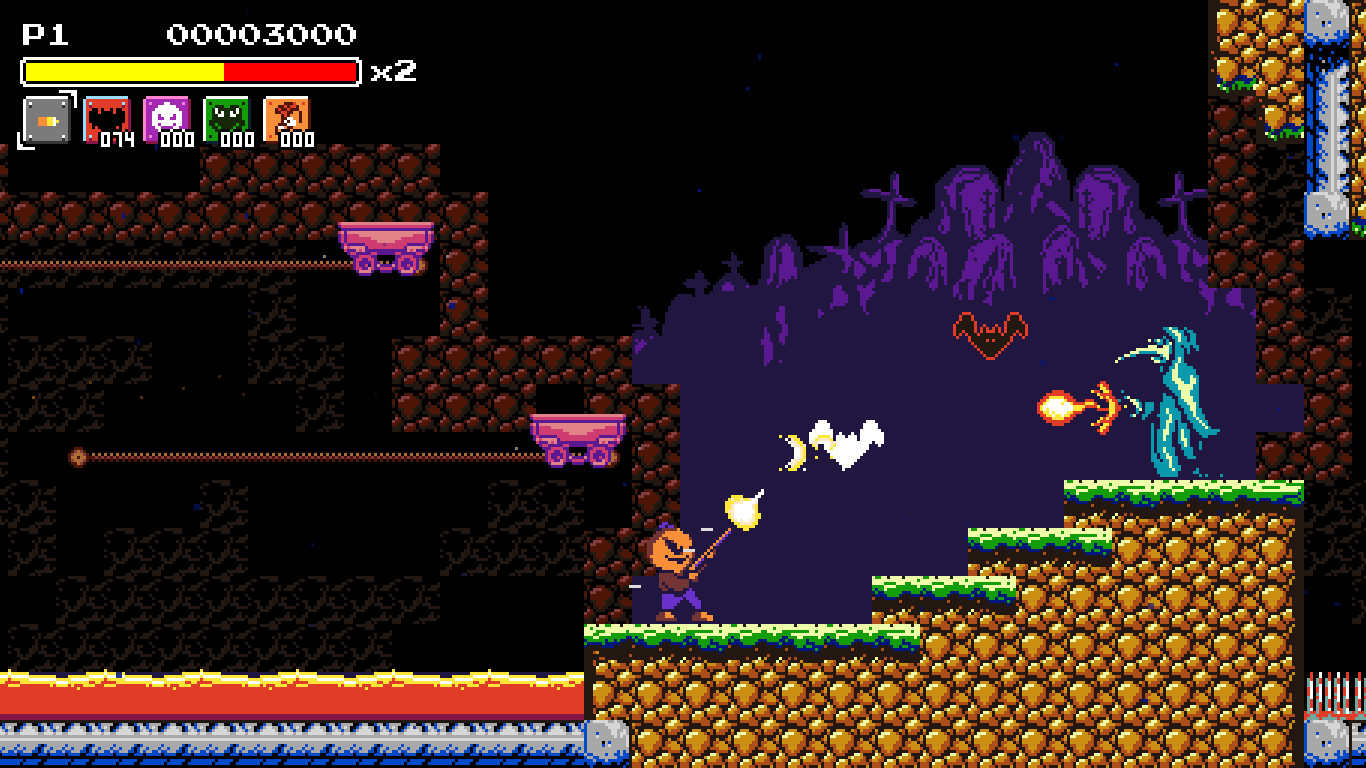 It isn’t often that a hectic run-and-gun-style game is thought of as accessible. The very nature of the genre requires a lot of dexterity, and most are fairly punishing. However, as with Street Cleaner: The Video Game a few months ago, classic genre generalizations don’t always apply to modern-day games. Even those designed with an older visual style can still be crafted to be accessible to more players, and that’s the case with Savage Halloween. Savage Halloween overachieves in every regard, from delivering a top-shelf action-platforming experience, to doing so while being user friendly in every regard.

Savage Halloween features the ability to not only run and gun but also lock the player in place with a trigger button, which works faster and better on the Switch thanks to its lack of analog triggers. While racing games to tend to lose a little something with the digital triggers, games that require fast reflexes wind up being a bit easier to maneuver. Unlike a lot of games in this genre that stick with the d-pad for control, Savage uses both the left stick and d-pad, leading to a better experience for the user, as platforming sections tend to work better with a d-pad. However, with eight-way firing, the left stick can feel more natural for more accurate on-foot aiming.

Being able to switch between a bottomless machine gun and things like a spread shot or ground-roaming attack make combat very interesting. Players can stick to just the machine gun if they so desire, but it will make traversing the more enemy-filled sections harder unless they’ve mastered the ability to lock themselves in place and shoot away slowly. Going with weapons with more limited ammo like the spread shot can get players out of a bind, but they may find themselves out of luck relying on it all the time. In a way, having this kind of weapon selection available reminded me of the Mega Man games, where not all the secondary weapons are useful in all situations, but when they are, they’re a game changer and make the experience more fun.

The horizontal shooting sections pleasantly surprised because the genre can be tough to get right even for studios dedicated to it. Here, it’s easy to see a lot of care went into it because the usual trigger inputs for staying still on foot keeps you in the same direction in flight. This is fantastic when things get hectic on one side, as players are able to unload on enemies that pile up and then stop using the trigger to go back and forth between attacking both sides. Savage features a slew of different weapon types as well, more than usually seen in even high-end run and guns. While many games have power-ups for temporary usage, there aren’t many that include the ability to effortlessly swap between half a dozen weapons that can take out a variety of foes in different ways.

In terms of accessibility, Savage Halloween is shockingly inclusive for a shooting game. One lower profile example is the ability to change the color of your playable character. This may not seem like a big deal in theory, but being able to switch a character color in a normally darkly lit game is a big deal for anyone with colorblindness and some visual impairments. It can be hard to tell the purple-clad pumpkin, James, and the purple monster, Lulu, apart from some of the dark blue and black shades in many stages. However, by being able to shift Lulu to a bright yellow or grey and James to yellow or green with orange highlights works quite well for contrast.

Dominika is the third playable character, and her outfit is bright pink by default, so it winds up contrasting nicely without changing. However, players still have the freedom to put her in green, orange, or grey, enabling a sense of cohesion with the other character colors. Being able to change colors may have only been something that was designed for co-op play, but it works out really well for accessibility. This kind of strong game design winds up paying off in other ways, since it makes the game more accessible for all players while still keeping the core challenge intact.

Run-and-gun games are normally not all that accessible for anyone with fine-motor impairments, but Savage Halloween fares far better than expected thanks to more crafty game design. The game has auto-fire turned on by default, so there isn’t the issue of having to constantly mash a button, as players can hold the fire button down and switch between weapons with the right bumper at the same time. Being able to use either the d-pad or the stick is great for movement because it’s easy to put stick extenders on a Pro controller, the Joy-Cons, or any 8bitdo pad to increase accuracy and make movement a bit easier if the player has issues manipulating the normal-sized stick. The core action itself doesn’t rely on a ton of precision platforming, and the double jump helps ensure that even those sections are quite doable with just a bit of trial and error.

Savage Halloween is decently accessible for deaf and hard-of-hearing players with one unfortunate omission. Every song manages to fit the Halloween theme while still being tailored to suit the stages themselves; however, there’s no captioning for the music, so in that sense, there’s room for improvement. For the cinematics, all information is communicated through text, so it’s a solid effort there, and it helps that it’s a fairly simple story to follow anyway.

With a fast pace and responsive controls, Savage Halloween is a top-shelf run-and-gun game that blends with horizontal shoot-‘em-up action seamlessly. With both d-pad and stick controls, movement and eight-way shooting are a breeze. Being able to lock the player in place makes precision easy, while auto-fire helps keep things more accessible from a control perspective. Visually, having the option to change character sprite colors makes a world of difference, while the text-heavy narration is nice for deaf and hard-of-hearing players. Savage Halloween is a must-play run-and-gun game for Switch owners.