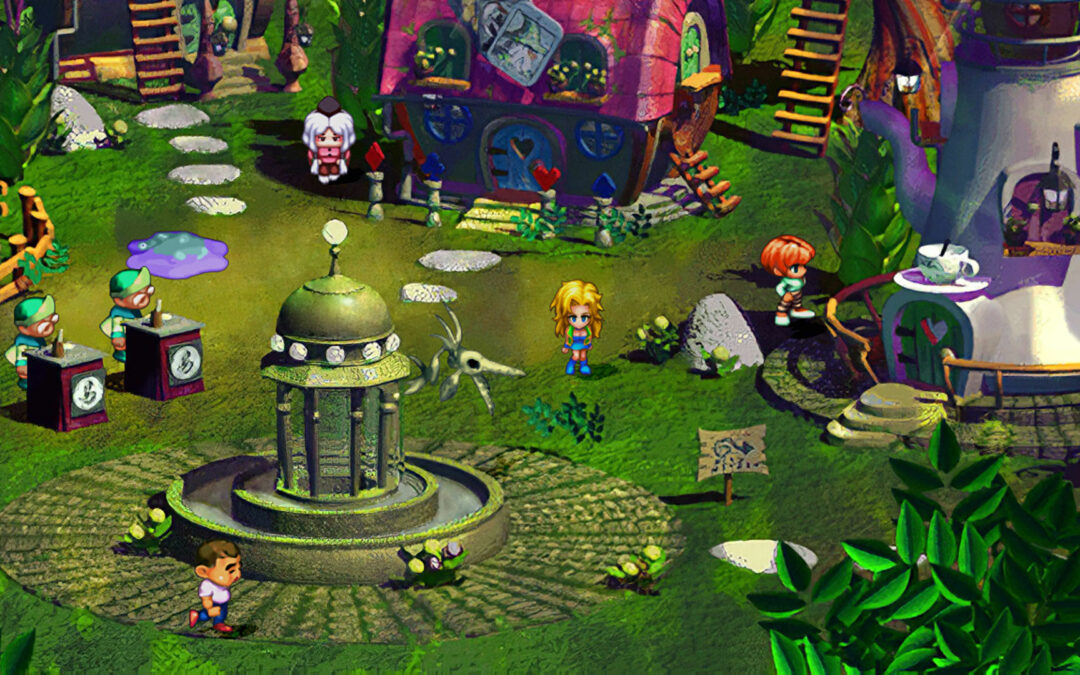 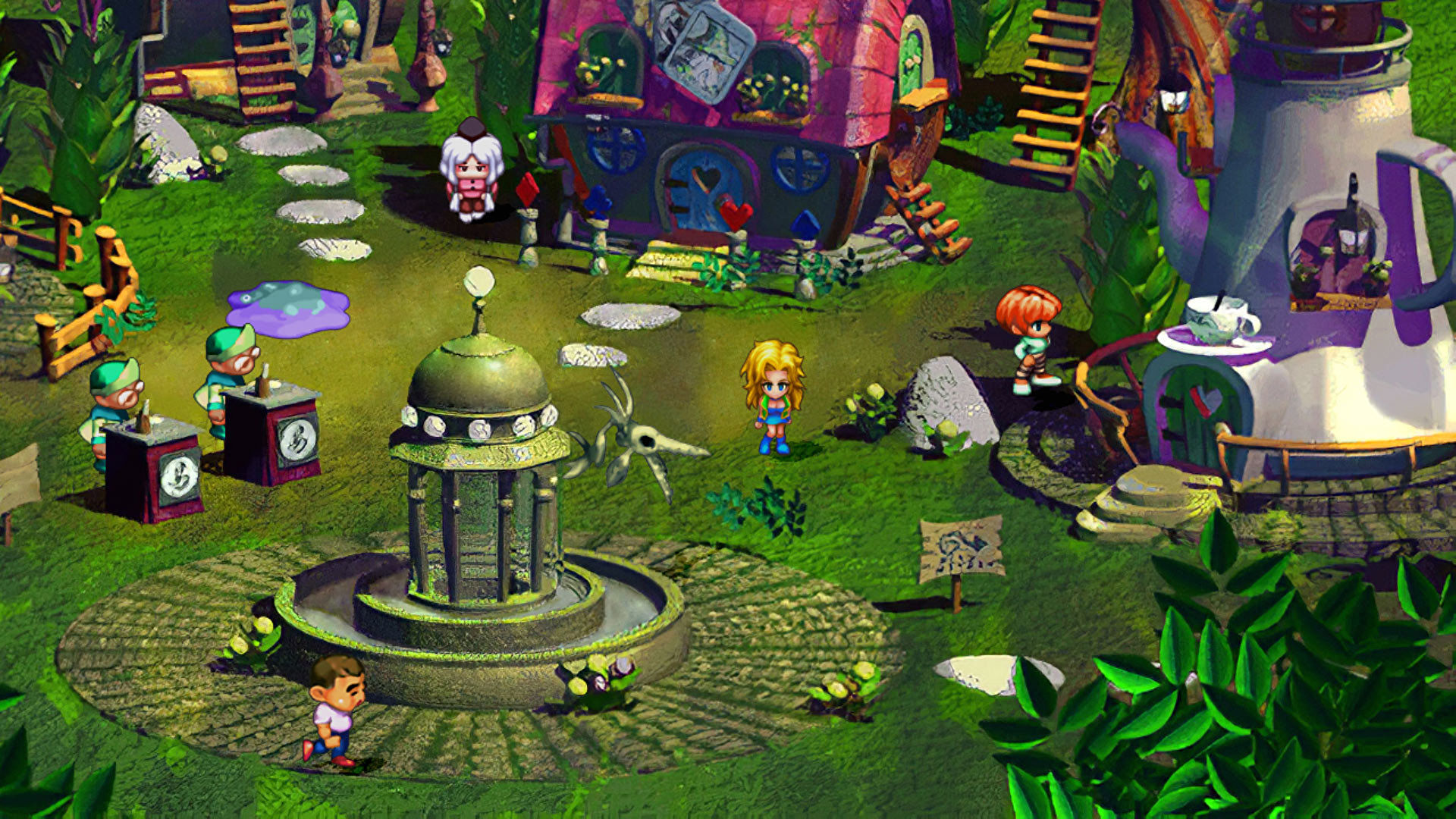 In 1998, when it was first released in North America, SaGa Frontier was the kind of game that stood out right away. At the time, most JRPGs featured a single large-scale tale being told, and it’s still the preferred method of storytelling for the genre. The original release featured seven different stories, but it was rushed out the door early so it could meet its release date. This resulted in an incomplete but still fantastic experience due to the unfortunate stifling of some of the story arcs.

The combat system is turn-based and uses a behind-the-back perspective, a bit like the Mother series but with classic Square Enix features like summons, elaborate spells, and a roving camera. This is a small feature but one that helps make combat feel like it all takes place in the same in-game world, since they can see the environment all around them. Unlike a lot of JRPGs of its time, SaGa only engages the player in combat when they hit an on-field enemy. The lack of random battles allows the game’s flow to be more organic, so if the player wants to focus on the story, they can and just avoid combat.

Also, unlike a lot of games from this time, there are no character classes, and the cast is quite diverse. Each of the eight playable characters can craft a party, with over 30 side characters added to the tale and the party. There are several races that all learn things differently. Humans are the jack-of-all-trades group and can be spell casters, offense-based, or healers. They can gain weapon techniques, which mystics can’t do, but they can’t learn magic attacks from enemies. Mechs don’t gain stat boosts from battles but can learn new skills from defeating other mechs. Monsters don’t gain stat boosts but can gain another monster’s abilities by defeating it.

Combat also features a combo system where ability-based attacks chain into one another. There’s a lot of depth to combat, and it makes each campaign feel different, even with the same basic turn-based combat system. There’s no grinding here, and trying to stack the deck in one’s favor works against them. This is good in the long run, as it forces the player to improve their skills, and this remastered version is a lot easier to learn than the original release. That one featured minimal documentation in its manual when compared to the new version, which features more in-depth explanations of the battle mechanics and in-game story threads to help keep things clear.

SaGa Frontier Remastered is a fantastic game from an accessibility point of view when compared to the original release. One big upside to this being a cross-platform release, including mobile devices, is that the user interface has been revamped to include larger icons and text for menus and dialogue. This works wonderfully on both the Switch and PC but is especially beneficial for Switch users, since most JRPGs feature smaller text with no size options and are thus a tough genre to fully recommend on the console. Because the text is so large, there’s no real need for a text size adjustment, and it’s easy to read across all campaigns. Plus, players can still change the text font and backgrounds to suit their preferences, so it’s a win-win there as well.

On the auditory side of things, SaGa Frontier is very dialogue-heavy but doesn’t use voice work. Instead, like a lot of RPGs of its time, it uses text to tell its tale. The end result is an accessible game for those with hearing impairments, as there isn’t any lost audible dialogue. However, there is still some room for improvement, as there’s no description of the game’s soundtrack. The soundtrack is robust and goes from serene to somber to intense during big battles, and it all plays a part in setting the tone and establishing the mood of each story. Hopefully a firmware update across platforms will enable this to be added later, as it does allow for a more complete way for a game with a robust soundtrack to be enjoyed by a player with a hearing impairment.

From a fine-motor perspective, SaGa Frontier Remastered finds itself in an interesting position thanks to both its genre and remake being fairly user friendly in that regard. Either the d-pad or analog stick can be used for movement, so if a player can use an analog stick and a face button, it should be playable to completion without much difficulty. The caveat here is that this is a very long game, so it can turn into a bit of a tiring one if someone is prone to joint fatigue. However, this can be lessened a bit with the addition of not only a dash button (lower-right face button) for in-world navigation, but also the ability to speed up all animation with a click of the right stick. This is great for skipping through cutscenes that are dragging on with minimal movement and also makes overworld navigation fast. This isn’t ideal for enemy-heavy areas, but for narrative-filled sections, it is a huge timesaver.

SaGa Frontier Remastered is a fantastic pickup for anyone looking to enjoy a classic JRPG experience in its best overall form to date. The revamped graphics are a lot cleaner than the original art, with sharper and more vibrant colors, easier-to-read text, and large icons. The result of these changes is an experience that winds up being far more accessible than a lot of modern-day RPGs due to the trend of modern-day rereleases respecting the players’ time more. This means SaGa is easier to see and play than ever before. For a remaster of an over 20-year-old game, it’s quite a bit more accessible than before and a welcome addition for anyone with a PS4, Switch, or PC to enjoy it on.