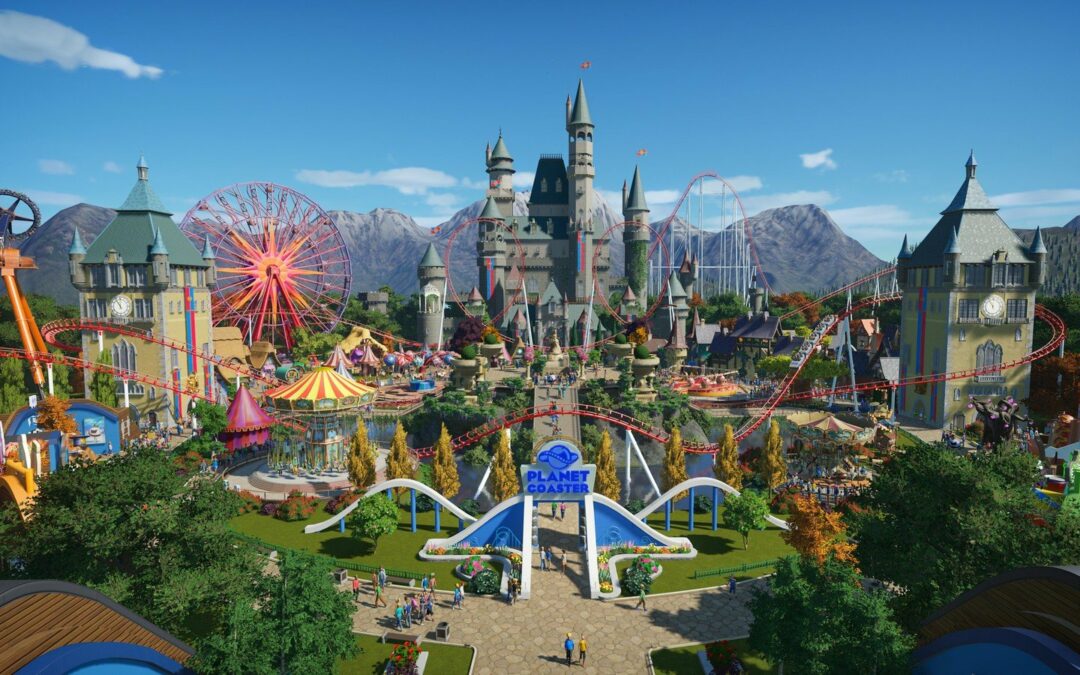 Simulation games have been a regular part of gaming for over 30 years, but none hooked me quite like the Theme Park games. The first incarnation I played was on the Genesis, and it remained a regular part of my Sega Nomad play, which in hindsight wasn’t the best, since a simulation game on a small screen prone to blurry images isn’t great for a bad eye. Anyway, the game was a PC classic from Bullfrog and had follow-ups, but nothing quite matched it for me. Planet Coaster’s PC release in 2016 came close, and now that it’s on consoles, it feels like a bit of a homecoming to have a theme park-style game back on a console. Not since Thrillville in the latter-day PS2/Xbox era have we really seen a game quite like this on a home console, and it’s an interesting return for a long-dormant genre.

Planet Coaster stands out by blending the park creation suites of past classics with a more modern look and the ability to roam through the park via a zooming camera. Park creation itself has a lot of intricacy, and I love that you can either go in with a guided tour via the career mode or just jump into it with a sandbox mode. One thing that helps set this game apart from similar games of the past is its variety in themes for locations. You have your perfect mid-day weather area, an arctic area, a pine tree-filled alpine area among others, and you can customize things to mix and match different elements from each. In other games like this, you would normally have to unlock this kind of flexibility, but here, it’s available right from the get-go in the sandbox mode.

The career mode is fantastic since, like Theme Park before it, it eases you into things and even goes a bit beyond anything else in the genre in terms of tutorials. Given how much there is to do here relative to decades-old games though, it’s wise to do that. We’re far beyond the days of three buttons and a d-pad being enough to work a game like this well, and just adding a roving camera to see the action in real time is something that requires a tutorial given how much control you have over everything. It’s very much like framing a shot in a photo mode only constant since you can always move around. Or you can go old school and zoom it out to enjoy an overhead viewpoint.

The game’s keyboard and mouse controls on PC were logical, and they’re actually retained here on console. While it may seem a bit odd to support keyboard and mouse controls for a console version of the game, it’s smart since they’re fully rebindable. If you have a special keyboard or mouse that you prefer to use for any reason, including fine-motor impairments, then you’re good to go. If you prefer to use a controller, you still can, but having both controller and keyboard and mouse support in the console version is a fantastic way to ensure that you can enjoy this game in as many ways as possible even if you don’t have a gaming rig to run it.

Using a controller works surprisingly well, although there are a lot of double-button commands using the bumpers that can make things a bit more cumbersome at first. Luckily, you can bring up a command list at any time, which helps minimize any confusion if you’re going from game to game to game. You definitely want to be in the right mindset to play it because going from something fast paced to a simulation game can be tricky, but it is fast paced in its own way. Much like working in a retail environment, there’s always something to do; It’s just a matter of looking around and seeing what you can improve upon. With your park, there’s always an area that needs some upkeep or a thinly populated area that could use some trees or just something there to spruce it up a bit.

Planet Coaster has a wide swath of user-created content on PC thanks to the Steam Workshop, and that is retained thanks to the Frontier Workshop. This allows you to enjoy an unlimited array of new parks, rides, and buildings, including some based on popular IPs. Others allow you to rack up achievements really quickly, and some showcase smaller-scale parks that are great for when you want to have a bit of fun with pre-built parks instead of building everything from scratch. I found that going from the career mode and starting with the solid base of the guidance you receive was the best way to start, but I can also see that going with a pre-built park and learning things like camera controls there is a good way to approach things as well.

Going with a pre-built park is great if you want to learn things at your own pace since you can still edit anything you wish, making starting up the park and getting into the meat of the game a bit faster since you don’t have to worry about a tutorial. Going in this direction before completing the tutorial can be tough, as you can learn some things on your own, and the game does at least give you a reasonable in-game control guide in the menu, but it doesn’t provide much in the way of context. That’s where going through the career mode first makes more sense since you’ll have mastered the basics after a couple hours.

Visually, Planet Coaster looks decent on the Xbox One when you factor in that it’s running on seven-year-old hardware. The framerate is solid enough and doesn’t really slow down unless you have a lot going on at once. If you’re in a busy park and it’s a large area with a sea of people, it will chug a bit. Detail levels also take a hit up close, with muddy textures definitely hurting the presentation a bit. The game’s jovial soundtrack puts you in a good mood and keeps you in it. It’s a bit generic at times, and the voice work is a bit lifeless, but it gets the job done.

On the accessibility side of things, the game’s text conveys the goals but is far too small and doesn’t include a lot of size options. You can choose to shrink the interface text, but there isn’t a small/medium/large setting which for a text-heavy game like this can be problematic. The ability to rebind controls is fantastic for motor-impaired users though, as is the inclusion of keyboard and mouse support. When it comes to auditory accessibility, the game is fairly user friendly as all spoken words are in text form as well, and the text-heavy nature means you will largely be relying on menus to get things done instead of audio cues. Outside issue with not having enough text options, this is a fairly accessible game for most players, and the in-depth tutorial makes it a fantastic first-time simulation game.

Planet Coaster is a finely crafted modern interpretation of a classic subset of simulation games. It used to be simply tons of Theme Park knockoffs on the market, and with that dying out thanks to the decline of Rollercoaster Tycoon, it left a void, and Frontier Developments did a fine job of taking what made that series work and modernizing it. The Console Edition does suffer a bit from a lack of options when in text size but does offer a lot more control options than one might expect, and it winds up being a better game for it. It doesn’t quite have the same silly personality as Theme Park, but it does offer more on the management side of things, and being able to create your own parks is fantastic and a natural way to extend the life of the experience.