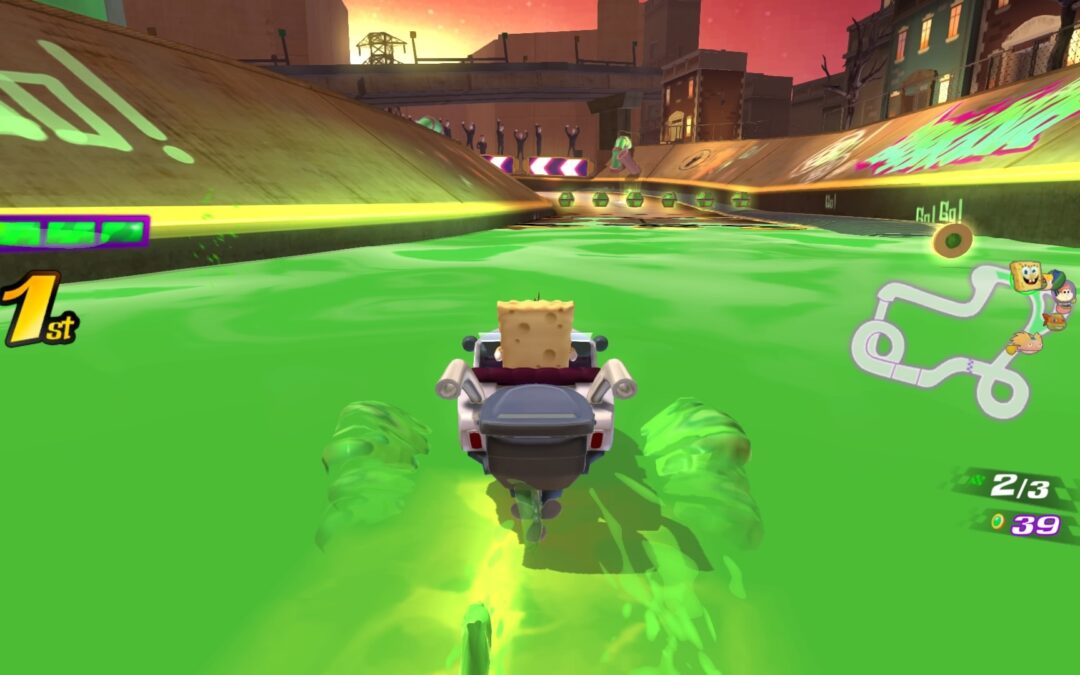 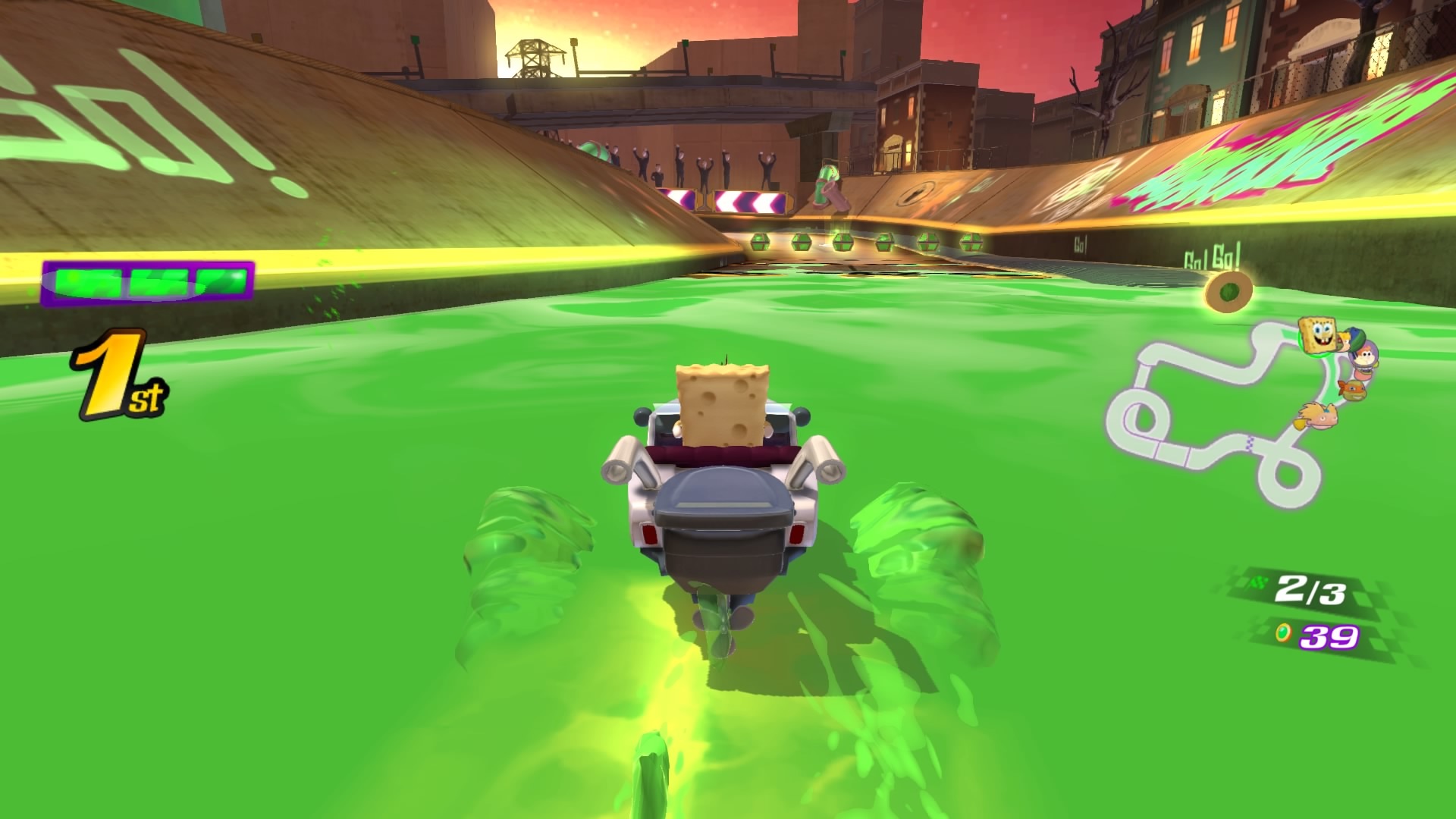 The first Nickelodeon Kart Racers game from 2018 felt like a rough draft that was shoved out the door as a final product. It had a solid foundation but lacked content with only a few modes to enjoy and a fairly small roster. It did however have a solid amount of track options and things like elimination races to keep things interesting. Thankfully, the developers at Bam Tang were able to not only accept that it was a flawed product but also use the license again to make a more definitive experience that would please a wider variety of fans.

The game’s playable roster jumps from a meager 12 to a whopping 30 characters across more parts of Nickelodeon’s history than before. The first game’s roster was almost 1/4 Teenage Mutant Ninja Turtles, with only a few characters from SpongeBob Squarepants and Rugrats while Hey Arnold had two. There was little to show of the network’s late ’80s/early ’90s rise to glory, and that market is one that would be willing to check the game out for nostalgia’s sake if nothing else. Thankfully, that’s been rectified here, so folks in the over 30 age range who grew up on not only the original TMNT show but also shows like Ren and Stimpy and Invader Zim later on will be pleased to see that era covered nicely. Rocko’s Modern Life is featured with Rocko and Heffer, while shows like Avatar: The Last Airbender and The Legend of Korra are here alongside three representatives from The Loud House.

With the addition of almost two dozen characters comes an even more impressive track listing, something the first game did excel at, and thankfully some of its best tracks have been carried over to the sequel. There are eight grand prix cups to play through and a healthy amount of content outside of “just” racing. You’ve got time trial and battle modes to enjoy, with the latter being very much like the original Mario Kart-style modes with a free for all mentality and the goal being to not only take out foes, but do so within a time limit. That one little change adds another layer of intensity to things because you can’t just stay in a few places and try to win.

The core racing action is a ton of fun and has a surprising amount of depth to it, topping even genre-defining games like Mario Kart 8 and Crash Team Racing in some regards. You can use either bumpers or triggers to accelerate, brake, and drift, offering more versatility and options depending on the kind of controller you’re using. When playing with a regular DualShock 4, the bumpers were actually a bit more comfortable to use than the triggers were. However, when playing with an Xbox One-style pad, the triggers felt far more natural and made things like going in and out of drifts and controlling the kart mid-drift much easier. Like Mario Kart 8, you can do a little hop with a bumper/trigger to go into a drift and come out of it with a boost, and this could easily save your bacon at the end of a race.

The rival AI is smart and uses not only power-ups against you but also more physical tactics like nudging you into the grass or using a projectile while you’re mid-flight to mess you up. This helps keep the action constant and ensures that you never go through the motions, as doing so is a sure-fire way to get sent to the back of the pack. Unlike Mario Kart, there is no position-based drop rate for high-powered items, and beyond the blue shell-esque purple squid, nothing is going to sure-fire help you plow through enemies quickly beyond a rare cola power-up that speeds you up but can easily send you into a corner if you aren’t careful.

Nick Kart Racers 2, like the original game, features a crew chief system akin to the sideline strikers in some fighting games where you can build up a gauge to use once per fill up. You can select an item drop or put up a shield to guard against some projectiles. Weapons can be fired either in front or behind you, making things like lawn gnome (similar to Mario Kart’s bananas) actually useful when you’re getting overtaken. There’s a lot of strategy with drifting, and it feels just as natural here as it does in not only Mario Kart 8, but Sumo Digital’s OutRun 2, which remains a gold standard for effective mid-drift controls. You just enter into the drift and make sure you’re in the center of the track, and you’re golden.

Control-wise, it’s a fantastic game when it comes to having options because you’re spoiled for choice. You can use traditional controller setups if you want, or you can use auto-acceleration and/or motion controls for your kart movement. Unlike most modern games, you can also use the d-pad for kart movement – which doesn’t feel natural on the Dual Shock 4’s d-pad, but does work surprisingly well for my Xbox One-style PS4 pad with the Elite disc-shaped d-pad that does a better job replicating full analog movement with a digital input. If you have a bit of arthritis in your left hand or have limited range of motion, being able to use a d-pad helps ensure you’re moving your left thumb less and have a natural center point to work with to tell where you’re at spatially on the controller.

Having the ability to auto accelerate can take some getting used to, but it works surprisingly well. You can control the kart easily with auto acceleration on and turn quickly with the motion sensor, but you can’t brake at all. Fortunately, you’re slowed down a bit for bigger turns, so it isn’t a major issue, and the face buttons still control things like your item usage and crew help. Compared to trying to use the old Mario Kart wheel for Mario Kart Wii or even the newer wheel-shaped options for Mario Kart 8 Deluxe on Switch, this controller-based method works very well and is quite impressive to see in a licensed release.

Nickelodeon Kart Racers 2 features a fast-paced soundtrack with a lot of original songs that wouldn’t be out of place in the Sonic franchise, with their overall tempo being right in line with that series. There’s no voice work, which has the benefit from a disability perspective of not requiring subtitles. However, there’s also no auditory description of the kind of music featured in the game, which is a bit of a letdown. There’s also no description of the weapon sound effects, and this does make it harder to know what weapons are being used if you can’t easily see them.

Visually, the game does feature a lot of bright colors, so if you’re sensitive to extreme colors, you will want to turn down the brightness a bit. If you can handle that, then you are in for quite a treat because the game does a lot in the name of visually accessibility. In races, you can turn the mini-map on or off, allowing you to get an idea of the track’s direction if you keep it on but adding an extra layer of challenge if you turn it off. In battle mode, large graphics showing the faces of the characters you’re up against help indicate where they are in relation to you, which can be a huge help if you can’t keep track of a lot of rapidly moving objects at once or have depth perception issues.

Overall, Nickelodeon Kart Racers 2 is a fantastic pickup for kart racing fans and surprisingly accessible given its genre and usage of licensed properties. The ability to use motion controls on platforms that enable it helps a lot when it comes to having fine-motor issues playing games, and while the auditory side of things needs work, there’s a lot here to make the game playable if your vision isn’t the greatest. Beyond being fairly accessible, it’s one of the better non-Mario Kart kart racers on the market and a great pickup for anyone who enjoys many of the biggest Nickelodeon franchises of the past 30 years.