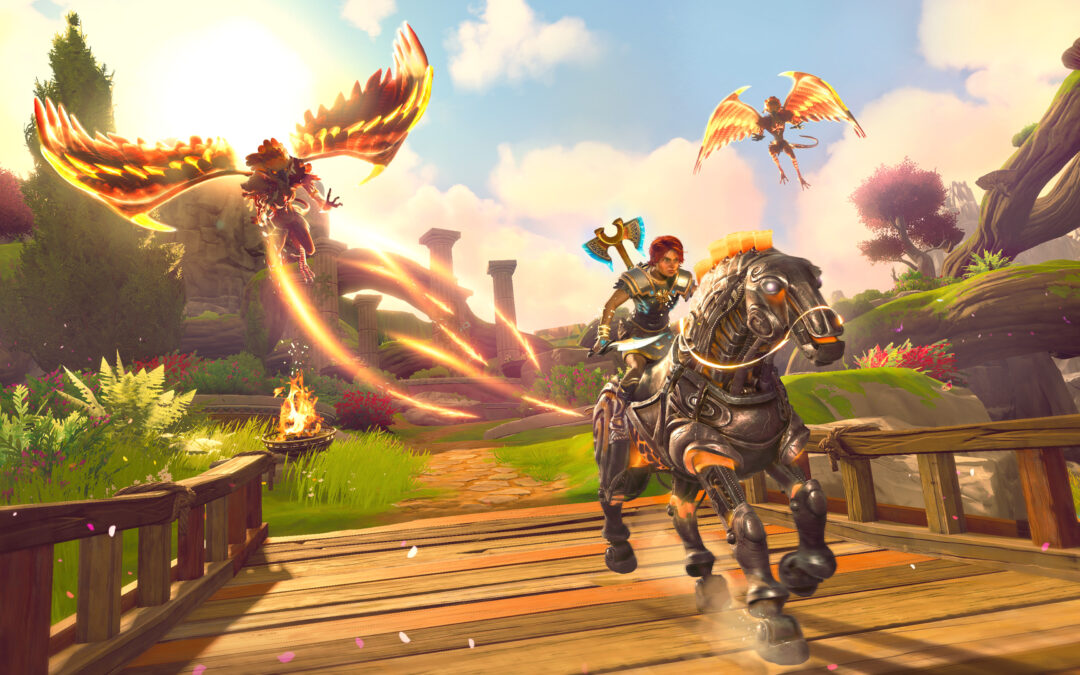 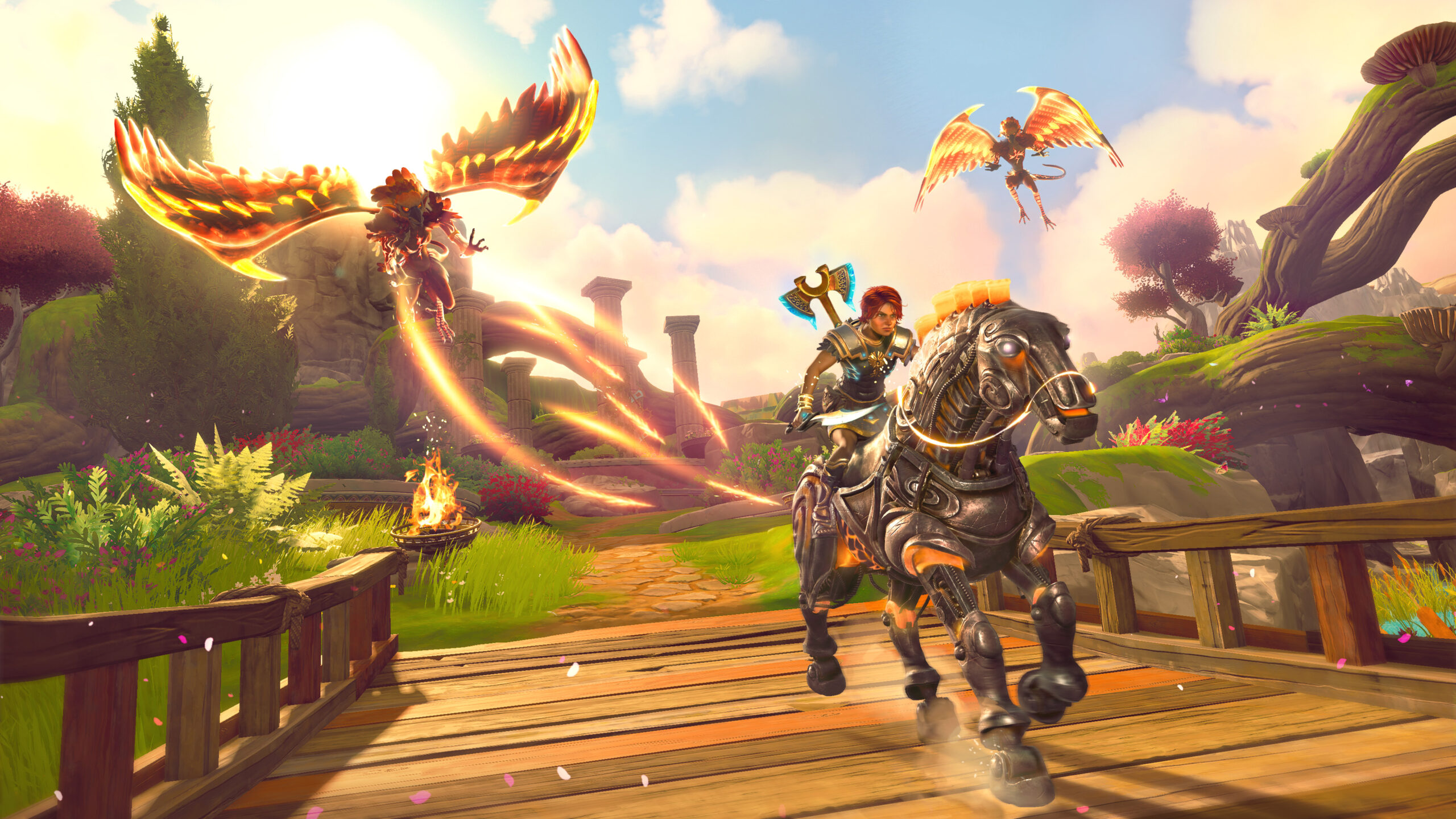 The latest offering from the folks at Ubisoft is a very intriguing package to say the least. It’s apparent from the very first frame that the biggest influence of this new IP is Nintendo’s Legend of Zelda: Breath of the Wild, and to my mind, this is by no means a bad thing. Initially unveiled as Gods and Monsters and developed by the same branch of Ubisoft that made Assassin’s Creed: Odyssey, the concept for Immortals: Fenyx Rising was conceived as the result of a visual glitch during Odyssey’s development that resulted in the player’s ship crew becoming cyclopes, leading to a separate project that embraced Greek mythology. Immortals: Fenyx Rising chronicles the exploits of the eponymous protagonist as they attempt to lift a curse placed on the land by the nefarious giant known as Typhon.

For gamers with fine-motor impairments, Fenyx Rising is a thoroughly accessible experience. Like Assassin’s Creed before it, the controls here are fully customizable, but customizing them means creating conflict between inputs. In Assassin’s Creed, this is forgivable because there are buttons bound to actions that aren’t a requirement for success, so you can simply remap, but in Immortals every button is used. During my time with Immortals, I opted to use square and triangle for attack buttons instead of the shoulder buttons only to realize that triangle was also used to interact with objects, so I’d be fighting an enemy, and Fenyx would pick up or use an unnecessary object. I then remapped this action to up on the directional pad only to discover that it’s also used to consume a potion that increases attack power. Even though this is easily overcome with trail and error, overlapping controls are a very tricky problem that has persisted in Ubisoft’s franchises since Assassin’s Creed: Origins and is becoming harder to ignore. Since Immortals’ biggest influence is Breath of the Wild, puzzle-heavy dungeons with platforming sections comprise the majority of the gameplay here. These sections are not particularly long or difficult to understand, and many of them, particularly those where the player must manually control Apollo’s arrows, can be made easier by selecting the toggle option for the bow. Immortals also offers an option to increase the time limit in time-based puzzles, and this along with dungeon checkpoints and the bow toggle ensure that anyone can best them with a little bit of tenacity. The only criticism is that arrows cannot be controlled with the left stick, which could create a barrier for players with limited dexterity, and it’s also a shame that the aim-assist doesn’t target inorganic targets like switches to help during puzzles. However, platforming sections are alleviated by an option that ensures Fenyx will always jump to maximum height regardless of whether the button is tapped or held, and the rewards at the end of each dungeon are worth it.

In terms of visual accessibility, the experience is barrier free. Subtitles contain speaker tags, and their background opacity can be adjusted manually. Three colorblind settings are also available. Reading the in-game map shouldn’t present barriers of any kind. Icons are presented with a large size and are all distinct in shape, so they won’t blend together to cause confusion when navigating. Visual feedback in the form of 3D icons for constellation challenges is available and displays where the puzzle’s pieces are located. In the puzzles that involve reconstruction of fresco paintings, three options are available, which are as follows: off, guide trims, and trims and solver. Naturally the off option turns visual aids off completely. Guide trims place a visual outline along the moveable pieces. Selecting trims and solvers gives the aforementioned outline but also adds an arrow that shows which way each piece can be moved. Every type of challenge in Immortals has its own set of visual aids that can be calibrated individually to ensure a barrier-free experience for low-vision players.

Those with auditory disabilities will also find a barrier-free experience. The variety of options available in the subtitles mentioned above goes a long way in optimizing the experience for hard-of-hearing players. Solving a puzzle correctly provides tactile feedback in the form of vibration in the event that a player cannot hear the in-game chime. Visual and directional feedback for environmental sounds like switches activating, doors opening, and torches burning is provided in the form of circles with an arrow in them that identify the sound and point to the direction it’s coming from relative to the player’s current position.

Immortals: Fenyx Rising shamelessly wears its biggest influence on its sleeve, and while those who played Nintendo’s crown jewel may dismiss it as little more than an attempt to recapture lightning in a bottle, those who pay attention will find a noticeably more light-hearted experience thanks to a cheerier tone and writing that never takes itself too seriously. Players who passed on Link’s most recent journey due to not owning a Switch or fear of inaccessibility finally have a hero’s journey that isn’t only comparable to Nintendo’s magnum opus but succeeds in being the accessibility-friendly substitute that so many players have eagerly awaited.