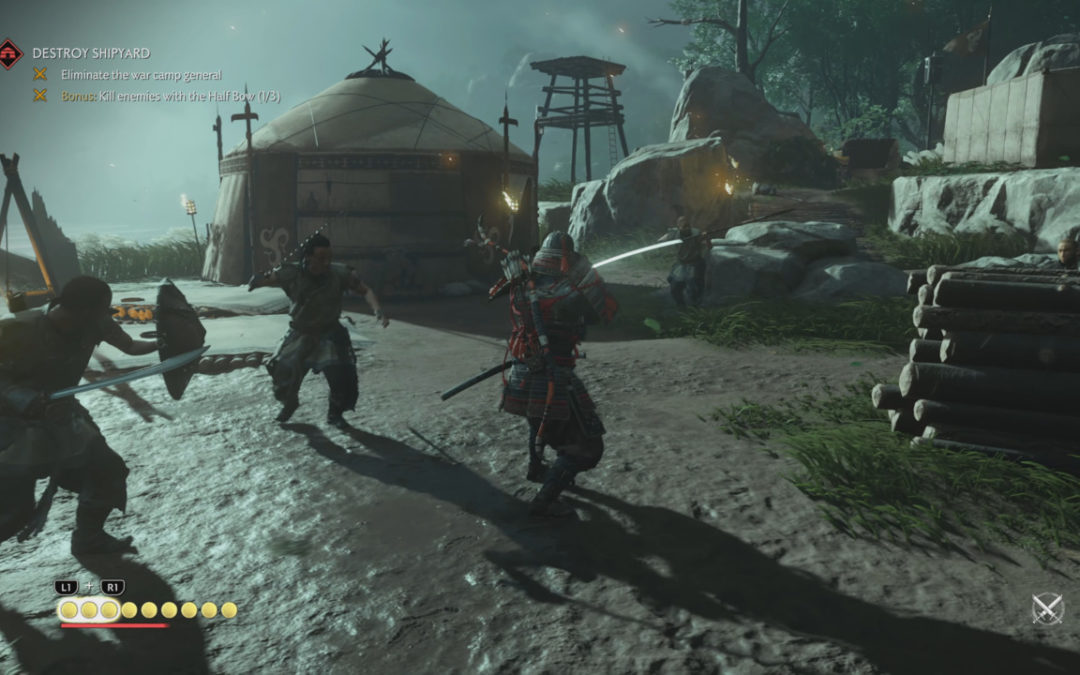 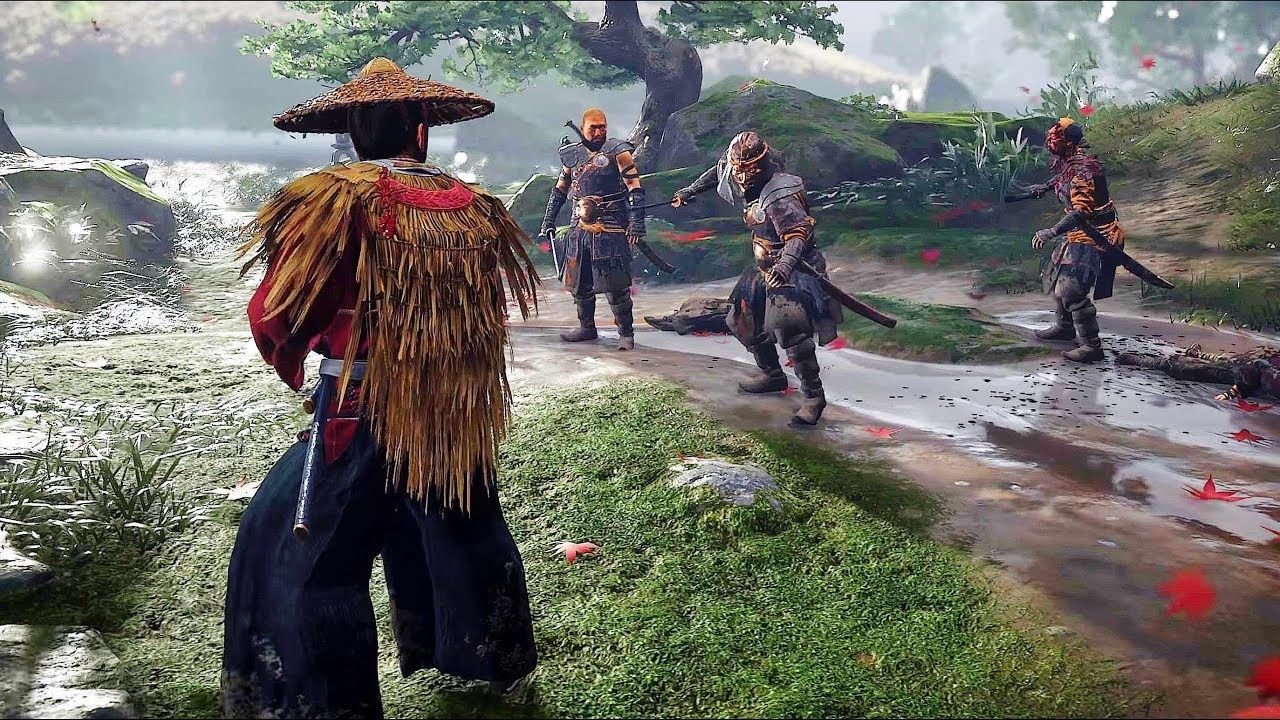 Ghost of Tsushima is a spiritual successor to the Assassin’s Creed franchise and a love letter to classic Samurai sagas, both of which hold a special place in my heart.  I was pumped for this release, but I was prepared for disappointment. I didn’t expect to be able to play Ghost, but that wasn’t going to stop me from trying; after all some games are simply worth the struggle. My question ultimately was how much of this beautiful game will I actually get to enjoy? Surprisingly, the answer was ‘all of it,’ but that won’t be the answer for most gamers with physical impairments. It’s killing me that I won’t be able to recommend this game to more people, because as of today, it’s taken the spot as my favorite game of all time.

The group least affected by the barriers in Ghost of Tsushima is deaf and hard-of-hearing players. This is because the game features highly legible subtitles with speaker tags and visual elements that reinforce many of the sound cues found within this story. Yet, there is substantial room for improvement. For instance, while the subtitles can be letter-boxed for additional clarity, they suffer from a larger issue: they cannot be resized, which may make it difficult for some players to read the text. Additionally, while the speaker tags that currently exist are well done, they are present only for characters other than the protagonist, Jin Sakai. In a lesser game this might not even register as a barrier, but for a story that is as rich and as potent as this one, it really is a shame that anybody could miss out on even the smallest portion of the narrative. For those with severe hearing disabilities, there’s another issue: there are no visual cues for certain ambient sounds, such as groups of Mongols or bandits attacking villagers on the road. When these villagers are rescued, they sometimes give you clues to the location of certain points of interest like Mongol encampments, which means unless you see these encounters unfolding, you may miss out on some of the more fun and challenging moments Sucker Punch designed.

The situation is slightly worse for visually impaired gamers, and these barriers arise not from features inherent to the game or genre, but from choices Sucker Punch deliberately made which, while they beautifully support their vision, may exclude many visually impaired gamers. First and foremost, let’s talk about the Guiding Wind mechanic, which allows players to use the wind, represented by white streaks and blowing particle effects, to direct Jin toward whatever objective he’s tracking. In the first two acts of the game, this is actually a boon for visually impaired gamers because the white streaks show up clearly in the environment and help get you to your destination without having to stare at a mini-map, but as Jin moves north on the island of Tsushima, the environment gets more and more snowy. The result is a loss of contrast between the terrain and the guiding wind, turning this innovative feature from a boon into a barrier when it’s needed to reach the conclusion of the game’s narrative. Sucker Punch just barely missed the mark on designing an innovative, new method of navigation that improves the experience for all gamers.

One of the primary selling points of most RPGs is exploration. Because most of this game’s exploration relies on slight visual cues, such as following small animal guides, which can often blend into the surrounding environment or pass off screen so quickly that it’s easy to miss them, or noticing smoke billowing from a point of interest, it will be difficult for visually impaired gamers to fully access this title. It’s true that you will more than likely find a number of these on your own, but without relying on Sucker Punch’s signature mechanics, it’ll be mostly up to chance.

On top of this, problems arise with the game’s map, and again Sucker Punch gets halfway to perfect. The icons are clearly distinguished by shape, but most are all the same color, white, and because the map is a light shade of gray, the contrast is lacking. On a positive note, I’d like to see Ghost of Tsushima’s enemy combat cues adopted more widely. They’re highly visible and indicate which attacks can be blocked or must be dodged and when archers are about to shoot an arrow, making it easy to know what’s going on in combat.

Finally let’s talk fine motor (my own disability) and the area in which Ghost of Tsushima has the least to offer. The game pushes players toward a combat style that’s both highly reactive and incredibly fluid, yet many of the accessibility features implemented to try and alleviate barriers to combat actually create smaller barriers of their own on their way to making the game accessible. For example, Sucker Punch allows you to turn all button holds into toggles, which sounds great until you realize that accidentally opening either the items or combat stance menu does not pause the game while you make your selection. Several times I found myself dying in the middle of combat because I was hitting the attack button not realizing I had left one of the menus open. The aim assist is another stumbling block. It’s way too heavy. I actually ended up turning it off for most of the bow and arrow segments because it has a nasty habit of locking on to unintended environmental targets rather than enemies. For many of the stealth sections, I deactivated it so I could shoot enemies further away rather than locking onto lower impact targets closer to Jin. On the flip side, drawing and firing the bow with a toggle was excellent and something I hope more games adopt in the future. Sadly, some of the game’s best accessibility features such as enhanced listening or lengthening the window to perform perfect dodges and parries are locked behind either narrative moments in the game or finding specific charms that can only be reached through the game’s sometimes grueling platforming sections. But by far the worst problem is the complete lack of any control customization. I want to be clear; I respect the difficulties Sucker Punch would have faced if they included control customization, especially given the fact that every button on the controller has multiple functions that change based on context.  I’m not faulting them for it, but you need to be aware that one of the biggest and most important accessibility features today is absent in this game unless you use the hardware remapping Sony provides.

At this point, I’ve painted an incredibly grim picture of Ghost of Tsushima’s accessibility, and it’s true from a technical perspective that it’s inaccessible, but there is one thing that saves it. Whether or not they realize it, the developers at Sucker Punch understand the fundamental nature of accessibility; the gameplay of Ghost of Tsushima is both highly flexible and forgiving. Every encounter has innumerable ways you can complete it, and dying does not make you retread much ground before trying out a different solution to whatever it was that was giving you trouble. This level of flexibility and forgiveness meant that, despite how exhausting it was, I was not only able to complete the game with little help, but I also earned the platinum trophy in the process. Even if the game’s accessibility features are incomplete, they’ll provide benefit to many disabled gamers. Without the limited options Sucker Punch provided, I would not have been able to progress through the game at all. My only regret is that more people won’t be able to enjoy this once-in-a-generation masterpiece.