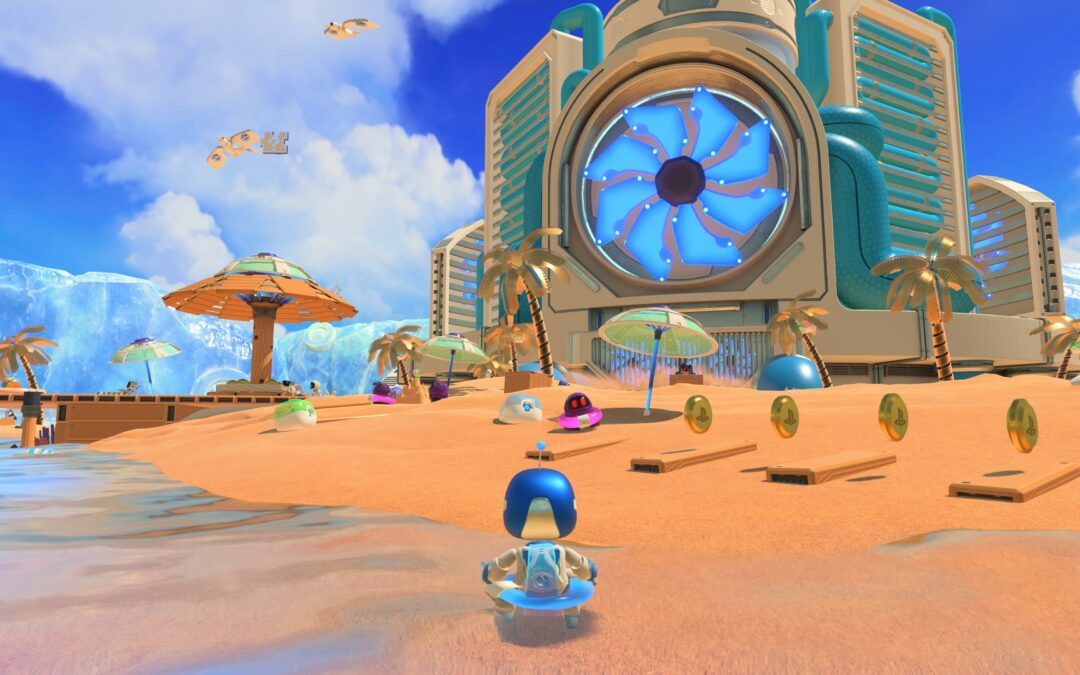 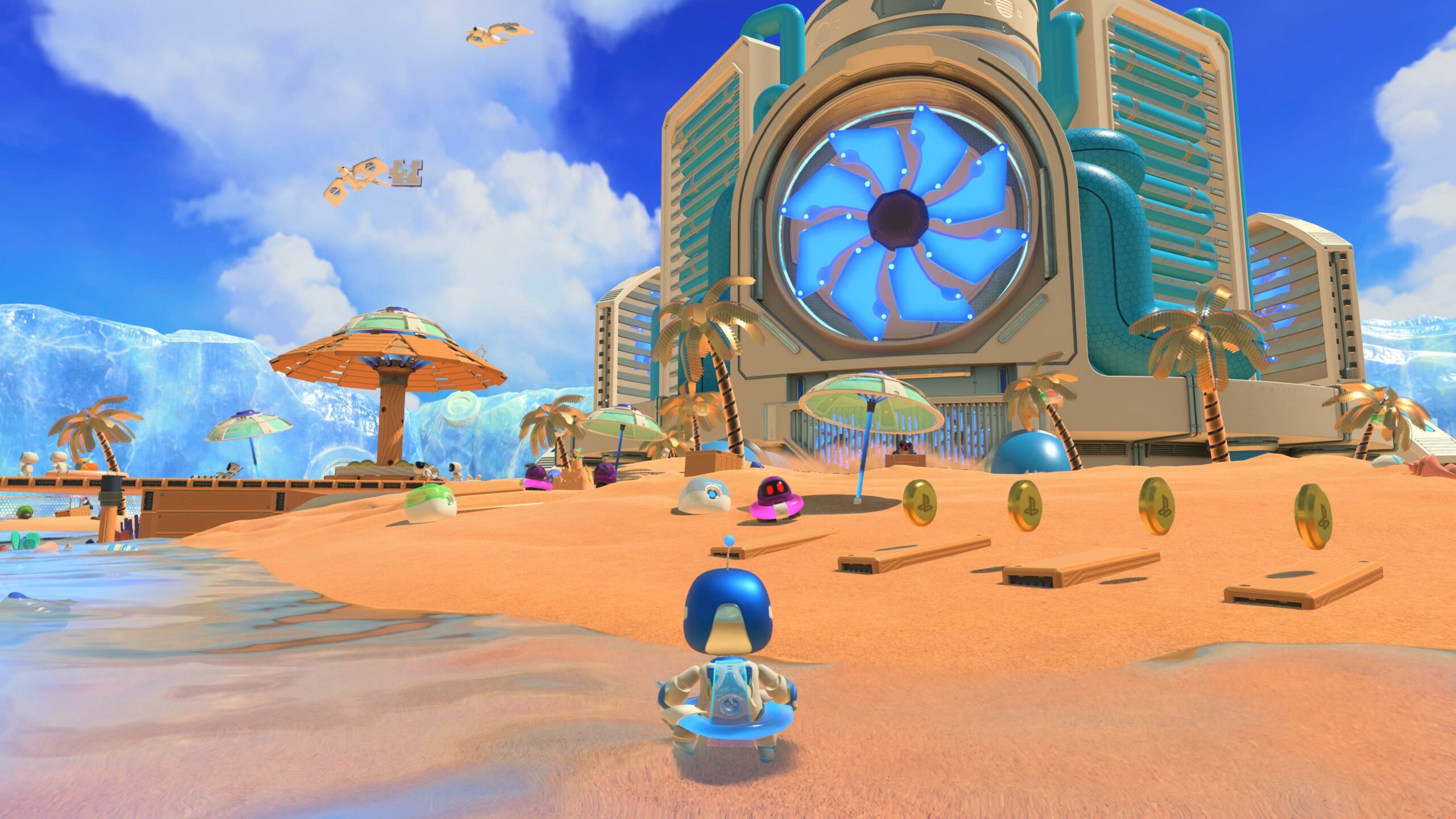 The Astrobots have been slowly building themselves up as mascots for the modern PlayStation era in unique ways. Starting out as characters in augmented reality mini-games using the PS4 camera, they then went on to star in a PlayStation VR platformer that became one of the best 3D platformers of the last era. However, that game and the characters being limited to the PSVR platform hurt their exposure a bit despite it getting rave reviews across the board. Now, Astro and his buddies are back with Astro’s Playroom, the first pack-in game on a PlayStation console at launch in history, as it’s pre-installed on every system and one of the finest pack-in games ever.

The idea behind Astro’s Playroom is to show off everything that makes the PlayStation 5 feel like a new generation of gaming is upon us, and more than anything on the market, it does that. It may seem strange to say given that it isn’t a AAA-level game like Spider-Man: Miles Morales, but the development team at Team Asobi has poured a lot of love and care into the game, and it shows in every part of the adventure. It’s a love letter to 25 years of PlayStation history, with nods to things like the EyeToy and even the original PS1 dinosaur tech demo alongside countless little references and nods to things in the backgrounds of stages to help immerge you in the PlayStation experience.

Throughout the history of the brand, platformers have been some of the best-received games on their respective consoles’ library. The PlayStation 1 had classics like Crash Bandicoot alongside lesser-known gems like Jumping Flash, while the PS2 era brought us Ratchet and Clank, Sly Cooper, and Jak and Daxter. The genre hit a bit of a skid for the PS3 era but did get a new set of Ratchet and Clank games, while the last generation was largely about remakes and some originals like Crash Bandicoot 4. Astro’s Playroom shows that this coming generation can use things like the DualSense controller to expand the experiences offered up in a 3D platformer and change the experience in ways that we haven’t seen for the genre since a second analog stick made camera movement more intuitive.

Astro’s Playroom uses the DualSense in ways that are absolutely transformative for 3D platforming, since the controller’s features have been integrated into the game’s design in ways that you just couldn’t imagine. Sliding across ice like you would in countless platformers over the past 30 years has a new feeling when you can literally feel the ice’s uneasiness thanks to the controller’s haptic feedback allowing you to sense a shift in weight from one side to the other. You can zip down a stream and feel your raft’s momentum shift from the top of the controller to the bottom as you go down a waterfall and hear the crack of the wind through the on-board speaker before blowing on the mic to twirl a pinwheel to keep your momentum going.

The core game is a blend of an action-platformer with a bit of a collect-a-thon thrown in. You’ve got short-range punches to use alongside your booster’s fire blast to take out enemies below you. It’s a great combination of attacks because you’re never really defenseless in the game—you just have to figure out attack patterns. Some larger enemies will drop down and expose wires, and as you’re taught early on, wires are meant to be pulled with the square button, where you’ll feel resistance via the controller and get a better idea of how close you are to pulling them out completely.

There are also area-specific weapons and items you can use, including a slick blaster that showcases the tension in the triggers quite nicely. The trigger usage is remarkable in every aspect of the game, and as someone who wasn’t the biggest fan of the PS4’s triggers, I’m impressed by just how well they’re used and how they feel in your fingers. They have a slightly deeper curve than those on the DualShock 4, which helps fit your middle or index fingers better.

The areas where you suit up in a spring suit were the first to really blow me away, as you’re zipping up the suit with an upward swipe of the touch pad and then experience something that has never been done in a game controller: actual honest resistance to your button presses. Instead of having the left or right triggers go down right away to reflect the spring-loaded action, you get a far more immersive experience of having resistance push against you so you do need to apply force to the controller to get the job done. It’s remarkable just how much more immersed you are in the experience when you have to take an active role in it just to move forward. You can’t just waltz through it and rely on muscle memory to carry you through.

The overall experience is one that you don’t forget, and it’s something that, much like Jumping Flash 25 years ago, could easily wind up standing the test of time just because there’s nothing else quite like it on the market. For better or worse, the industry just doesn’t feature a lot of games that are reliant on a single piece of hardware to showcase a new console’s wares. Sony did something similar to this with the original Ape Escape, which showed how much better a 3D platformer could be with two sticks to work with, but nothing modern has really done this, and part of that is due to the industry going more towards a universal standard of controllers without fully tailoring an experience beyond something like gyro support on a Switch Pro Controller.

However, while the large amount of trigger resistance is a welcome improvement from an immersion perspective, it isn’t so great from an accessibility perspective. The core game without the spring-loaded trigger sections is decent enough, as this is a reasonably easy platformer with a bit of collecting. However, having to exert force on each trigger may be a bit too taxing for anyone with motor impairments, and it would be nice to see something like a “skip section” option in the pause menu to help with that potential problem. You could do that or include a “super guide”-style section like Nintendo has done with the more modern 2D Mario games, where you can watch a stage being played and still have it count to some degree for completion.

Now, at a system level, you can turn off the trigger tension, which is good, but there should still be an option in the game itself. It could be as simple as offering a prompt that sends you into the console’s accessibility settings to change it there. Going with the strong option offers the most resistance, while medium requires less effort but still lets you know there’s a good amount of resistance. Weak is probably the best overall option for anyone who wants some of the tension sensation, as it’s at about 30% of the resistance, while Off would be akin to playing the game with regular DualShock 4 triggers.

Visually, Astro’s Playroom is gorgeous, with a ton of little touches in its world that help make it seem more realistic despite a cartoony art style. In that regard, it’s a lot like what Super Mario Odyssey was on the Switch a few years ago, just on a massive leap in hardware and a much smaller scale in software. Things like sand look lifelike, while metallic sheens glisten realistically. Lighting looks better than ever before, with ray tracing allowing for more detail in what you see in reflections, and it’s a visual stunner from top to bottom. The game does not have an option to make the UI larger, but those with low vision should be okay because the overall icons and video prompts for your movements and attacks are large by default, so even with a smaller screen or lower resolution, you can still see them clearly.

From an auditory perspective, it’s a unique game because you don’t get subtitles for the action, which is unfortunate, but some effects are replicated with both audio and touch thanks to the haptic feedback in the controller. In that regard, it’s not as bad because you can at least still experience the controller’s more nuanced features that showcase the game design, but there’s definitely room for improvement when it comes to describing the kind of music in the game. It’s a pretty serene game in that regard, but something like a description of it as happy, bouncy music would at least help paint the aural picture clearer.

As a showcase for the DualSense controller, Astro’s Playroom is both a tremendous example of what can be done to make gaming more accessible for players and an example of ways things need to improve. The addition of vibration and haptic replication of sound effects is great, but an in-game option to turn them off would be nice. Thankfully, its larger-than-usual UI elements and visual guides for things like attacks and touchpad movements help make it a better game from a visual point of view. Overall, it’s a fantastic showcase for the new hardware but one that could use some improvement when it comes to accessibility.