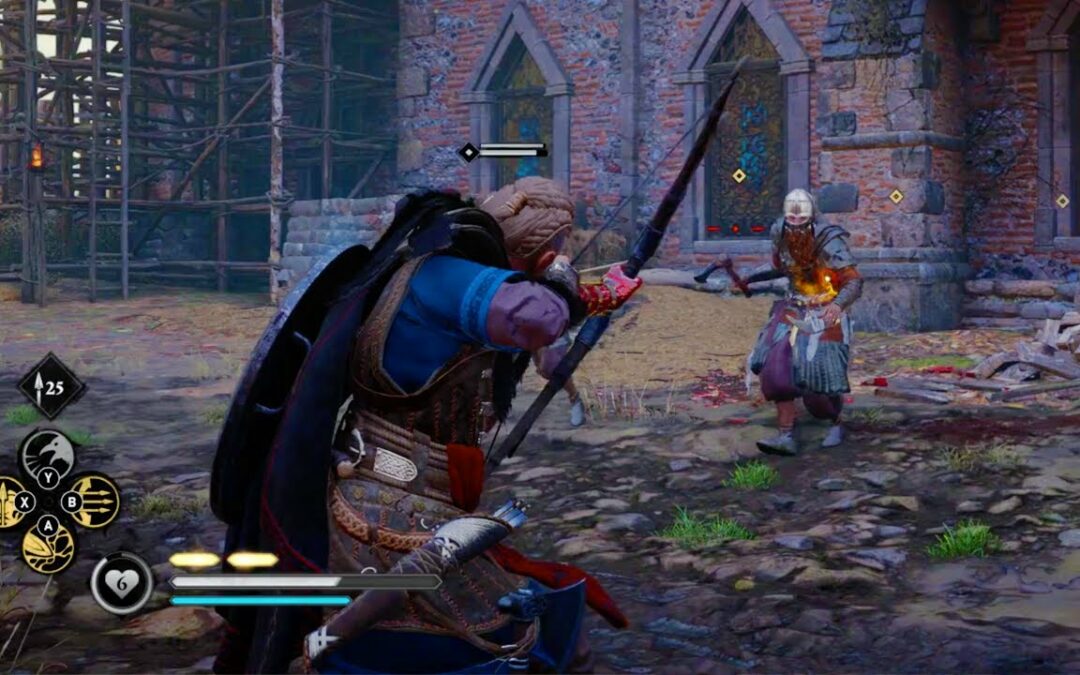 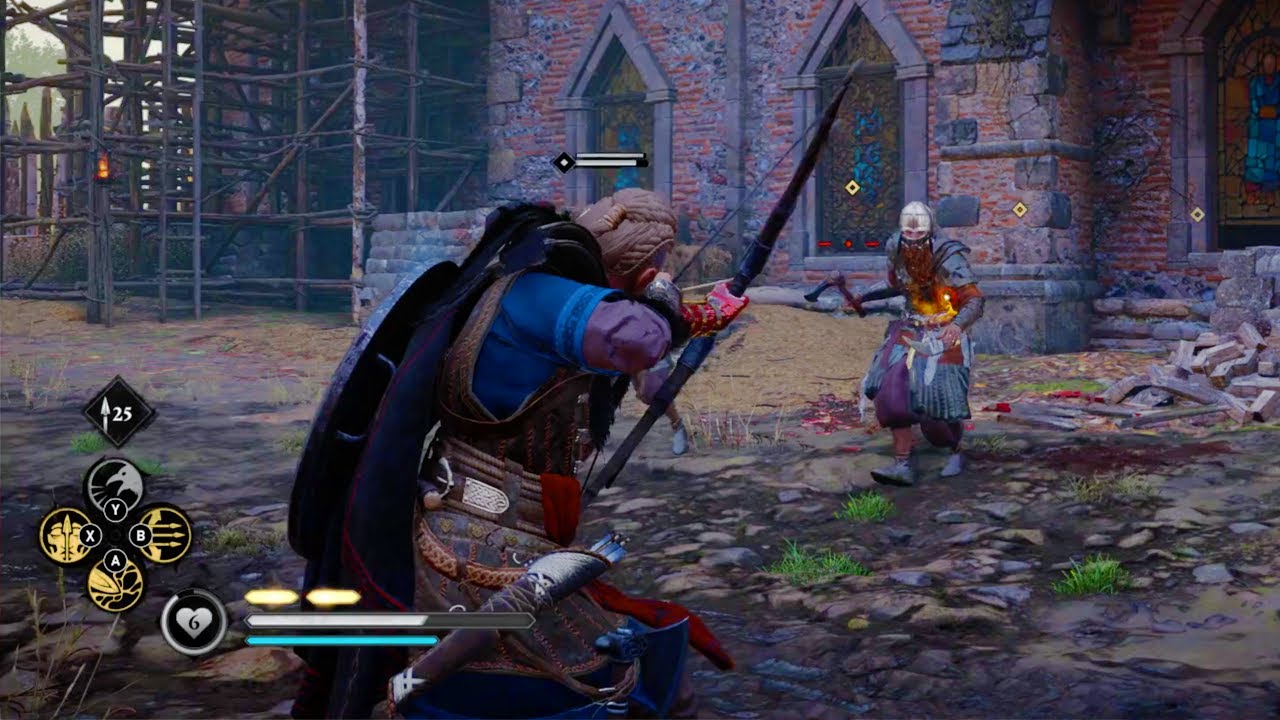 Assassin’s Creed Valhalla is the 12th mainline installment in Ubisoft’s flagship stealth action-adventure franchise. It serves as a sequel to 2018’s Assassin’s Creed Odyssey and is the third entry in a series reboot that began in 2017 with Assassin’s Creed Origins. Set primarily in 873 AD, Valhalla puts players in the boots of a Viking raider known as Eivor Wolf-Kissed, either male or female, as they leave their native Norway behind in an effort to avoid conflict with enemy clans and secure a future for their own.

Those who played Odyssey or Origins prior to Valhalla will feel right at home here. Accessibility for motor-impaired players is on par with the prior entries, and though there are a few flaws that prevent it from being entirely barrier free, nothing feels incomplete, too difficult, or unfair. One of the most important factors in any game with regards to motor-function accessibility is fully customizable controls, which Valhalla has. However, the customization can be a bit difficult because essentially every button on the controller has a function. It requires some trial and error to find a fully functional control scheme that works without overlapping button functions, but it works flawlessly once you get there. Combat in Valhalla is the most visceral the series has ever had. It’s brutal and gloriously violent. the game’s stun attacks, which can be triggered when an enemy’s stamina gauge has depleted are particularly worthy of mention. Thankfully, like Odyssey, Valhalla doesn’t contain any scenarios where stealth is required, and as such the problem that was abundant in earlier Assassin’s Creeds where being spotted triggered an automatic failure is absent here. This means fighting your way through an area is a viable approach should a player not be proficient in stealth tactics. The targeting system in melee combat is extremely efficient and even swaps to the nearest enemy when the first target is killed, ensuring attackers stay in front of you at all times. Unfortunately, I can’t say the same for the bow and arrow’s aim-assist, as it’s extremely buggy and erratic, often pointing at incorrect targets or just shy of the mark. This is particularly annoying when secret hunting, since they often require shooting hanging or out of reach objects to access.

In a franchise where traversal is such an integral part of the experience, I’ve always wondered why it required so many buttons in previous iterations. In Valhalla, Ubisoft wisely opted to streamline the parkour by binding all traversal actions to the X button. The days of holding a trigger and pressing buttons simultaneously are thankfully behind us. This coupled with the fact that Eivor can now climb more types of terrain than ever, including solid rock faces, means there are no longer playable areas that are hard to reach because the character is inexplicably unable to grab something. Certain items like Eivor’s torch are equipped by holding down on the d-pad to bring up a menu and selecting with the right stick. This menu can also be toggled to assist gamers with limited motor function. As in the previous two Assassin’s Creeds, Eivor has a pet bird that will survey their surroundings on command. The bird flies over any area and can be put into stationary mode to make marking targets easier; however, unlike the item wheel, the bird’s stationary mode doesn’t have a toggle option, and it can’t be remapped. This means that in the process of holding L2 for stationary mode, many motor-impaired players will more than likely also press L1 by mistake, causing on-screen markers to vanish until it’s released. Were the bird not an essential pillar of gameplay, I’d write this off as a minor oversight and call this game barrier-free, but it is used in every stage, so in the interest of fairness, and because other improvements to gameplay are so well executed, the motor-function rating is thoroughly accessible.

Visual accessibility is the area where the most recent Assassin’s Creed titles struggle most. This entry tries a few new tricks to rectify the visual accessibility shortcomings its predecessors bore, and despite a commendable effort, it still possesses many of the same and a few new ones. For example, the mechanic of using your bird to survey surroundings has been downgraded when compared to Odyssey. In Origins and Odyssey, when entering the general vicinity of an objective, you could put the bird into stationary mode and move the reticle, which would cause vibrations and intensify in color and brightness the closer it was to the target. When the color filled in completely, the objective’s precise location would appear on the map. In Valhalla, however, the vibrations and intensifying reticle have been scrapped in favor of a blue saturation of the general search vicinity, and the player gets no form of feedback when aiming the reticle precisely, so instead the player must place a custom waypoint inside the blue area and hope the objective is somewhere near it. The exact location only appears when the player is about 50 meters away. This is done to encourage exploration but more often than not resulted in me resorting to YouTube to pinpoint objectives because they were in towers or other tall structures, and the blue saturation only covers the ground level. In combat, whether an attack needs to be parried or dodged is represented by red runes for unblockables and yellow for blockable. However, there’s a third type of unblockable attack that’s represented by a yellow indicator, and these conflicting signals often lead to frustrating losses, particularly when fighting the imposing and formidable zealots. The game has similar issues with the open-world activities as well. In service of promoting exploration and accomplishment, Ubisoft has elected to hide map icons behind color-coded spheres, with gold representing wealth and blue representing mysteries. Wealth usually refers to a crafting material, resources for Eivor’s settlement, or a piece of armor. A player reveals the locations of these color-coded spheres by synchronizing the viewpoints that the franchise has become synonymous with. The trouble with this system is that the player must still make their way to the sphere and scan it with Odin sight, the game’s stand in for eagle vision, before actually discovering what it is. This defeats the purpose of having a bird’s eye view of an area. Odin sight is designed to work differently than eagle vision, in that rather than toggling it on and off, it sends out a single pulse when the button is pressed that highlights all enemies and items of interest within a limited radius. It also highlights the items through walls, but the color emanating from an item can sometimes be hard to spot even for those with no visual impairments. If an item is behind an obstacle that needs to be moved or destroyed to access it, Odin sight often fails to highlight the destructible object. In colorblind mode, the item or object is shown emanating energy as opposed to color, but the waves are often still difficult to spot. Valhalla has a plethora of other accessibility options for low-vision players, including resizable subtitles, speaker tags with the choice of color coding, resizable map icons, and more. When enlarged, map and compass icons still have the tendency to run together due to the fact that one can only adjust icon size across the board and not individually. Identifying item rarity is color coded, but its rarity is also written in resizable text, so it won’t create barriers.

Auditory accessibility doesn’t present any problems, so deaf and hard-of-hearing players should have a barrier-free experience. The game’s lock-on system is effective, so even those who can’t hear can easily identify assailants, and when attacked, indicators easily help to identify direction of the attacker. Resizable subtitles make certain that those with auditory impairments don’t miss a beat of what I perceive to be the most powerful narrative ever told in the franchise, an honor I previously bestowed upon Assassin’s Creed 4: Black Flag.

Assassin’s Creed Valhalla is the most ambitious and sprawling title Ubisoft has ever produced. In stripping back some of its features to encourage exploration, however, it lost one of the features that made the last two entries accessible. Despite some missteps, most notably with regards to visual accessibility, a much-needed overhaul of the traversal system and a powerful story that succeeds in letting you live out your Viking fantasy make this title an exceptional way to break in either of the next-gen consoles, should readers be lucky enough to find one under their tree this holiday season.