A Night in Hyrule 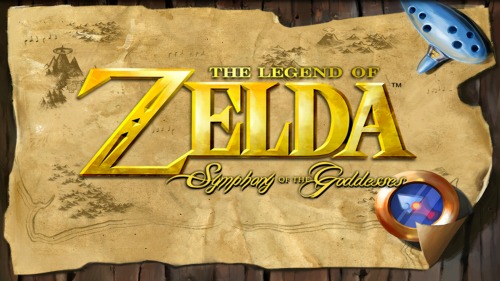 While not exactly a trip to save Zelda and stop Ganondorf, The Legend of Zelda: Symphony of the Goddesses is the next best thing.

Created by Jeron Moore and conducted in Minneapolis by Eimear Noone, Symphony of the Goddesses was a two and half hour submersion into the music of one of the greatest franchises in video game history.

The night opened with a rousing rendition of the main Zelda theme, interwoven with more of the most popular songs composed by Nintendo songwriter Koji Kondo. The night continued with a medley of the dungeon music that has signaled the frustration of many a gamer since the birth of the franchise. All throughout these first two opening pieces, there was a real sense that this music resonated with the crowd. The normally reserved Minnesotans were not afraid to cheer in the middle of a medley when the most memorable music began.

To make things even more interesting, above the orchestra’s heads there was also a large screen that showed gameplay that corresponded to the music being played. This elicited even more cheers during the final piece of the prologue, Kakariko Village, where audience goers were treated to the all too familiar sight of Link being mobbed by a bunch of angry chickens. These three pieces only comprised the prologue to the actual symphony, but they had already taken the audience through a nostalgic journey from the pixelated beeps and boops of 1986 to the soaring scores of Twilight Princess and Skyward Sword.

When the symphony began, it began where Zelda music truly became great, with the soundtrack from Ocarina of Time. The first movement included not only the main theme from this classic, but also a healthy dose of the various magical music that plays throughout the game, whether it be the Song of Time, the Song of Storms, or everything in between.

At this point it needs to be said that one of the best parts of the experience was watching the orchestra’s reactions. It was made up of 66 veteran members of various Minnesota classical musical groups and a roughly 20 member choir, who are more used to the refined reactions of Bach patrons than the rock star treatment they got from 1500 hard-core Zelda fans. But I honestly think they enjoyed it. After all, they did an exemplary job and deserved to know just how much they were appreciated.

Although it is not customary to pause between the portions of a symphony (called movements), conductor Noone did pause between the first and second movements to explain that this second part was her personal favorite because it was the Wind Waker movement, the Wind Waker being the magical baton that Link uses to conduct the wind. Noone had always wanted to be a conductor since the time she was a child. Having said that, she proceeded to produce a replica of the Wind Waker, and conducted the second movement with it. Wind Waker is my personal favorite in the Zelda franchise, so I would have to agree with the conductor’s preference.

The end of the second movement signaled the beginning of intermission. It was amusing when the lights went up to see how many of my fellow audience members had their Game Boys and DSs with them and were revisiting the areas in certain Zelda games, as if validating the fidelity of the orchestra’s performance.

A massive cheer went up as intermission ended to the opening bars of the Fairy Fountain Song. And creator Jeron Moore came out to explain that the final two movements of the symphony would encompass the darker, more brooding music of the Twilight Princess and the music of what is widely considered to be the best game in the Franchise by fans that grew up playing the series, Link to the Past.

The symphony ended with a trio of encores, including a much loved rendition of music from Majora’s Mask. As the symphony ended, one was left with the sense that they had just taken part in the opportunity of a lifetime—not only because the music was so expertly executed, but also because of the camaraderie and memories shared by the crowd.

The one ironic thing about my experience at the symphony was that some of the music was completely unknown to me, even though I am a huge Zelda fan. This is because the Zelda franchise has taken an alarming turn towards inaccessibility. As a result, all of the Zelda titles on the DS and Wii have not been accessible to me, and this was the first time I experienced the music of some of the most impressive games in the Zelda franchise.