A Deaf Noob In Call Of Duty: Ghosts’ Multiplayer 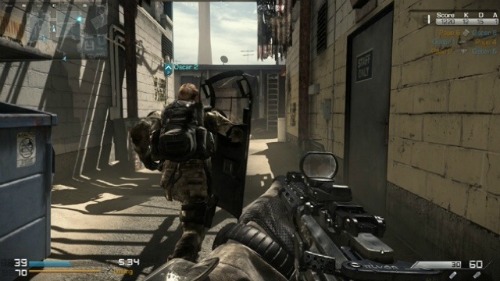 Inexplicably last weekend I happened upon an available copy of Call Of Duty: Ghosts for Xbox 360 at my local Redbox. Typically I check available games at the nearby Redbox out of hope rather than any expectation that the games I want are available. Simply due to the availability I rented the game for the weekend. The disc only allowed multiplayer access and I reasoned that the $2.00 nightly fee (plus taxes) was cheap access into the vaunted multiplayer.

I am not a Call Of Duty expert. In fact my time in multiplayer gaming has largely been limited to fiddling in multiplayer for the Assassin’s Creed franchise and the cooperative play for Mass Effect 3. Throughout this generation I felt lost in multiplayer modes. Indiscriminate noise with no clear directions coupled with a different control scheme than I was accustomed to from my time in the single player campaign left me feeling isolated. Multiplayer for me was often a scramble for the sprint button before I died, again.

I am a deaf gamer. Deafness is not the loss of all sound. Hearing is measured by assessing at what decibel (or volume) does an individual hear a frequency (or sound). Each person experiences a different impact by hearing loss that depends on what frequencies are most impacted. “Off the chart” hearing loss is when the machine is turned to its highest volume setting for a frequency and an individual cannot hear the sound. The Call Of Duty: Ghosts’ features that finally allowed me multiplayer access do not result in an accessible multiplayer for all deaf and hard of hearing gamers. By happenstance, in the last breath of this generation I felt included and finally understood the widespread appeal of multiplayer.

Upon entering multiplayer, us noobs are recommended to begin our multiplayer experience in the squad modes. The squad modes are mostly cooperative play with other online players against bots whether surviving enemy waves or capturing flags. I heeded the recommendation and jumped in at the recruit level.

Multiplayer traditionally has a nearly indecipherable introduction or none at all. Understanding the controller scheme, mode purpose, and just what is going on requires a lot of inferring information and internet searches. All the while playing matches as the team’s deadweight. Squad modes allow for practice. Not much more introduction is given, the modes are a safe place to learn the different maps, the modes, and experiment with different load outs while leveling up multiplayer characters.

In squad mode, wargames cycles through the multiplayer modes such as Blitz, Cranked, and Team Deathmatch. Or safeguard pits players cooperatively against enemy waves. I stayed with the squad mode eventually ending a recruit match with the high score. Now confident, I jumped into a regular multiplayer team deathmatch. Initially, I died often but I quickly learned how to plan for my devious peers rather than the dependable bot strategies.

My new multiplayer lessons included an immediate death upon entering a room when another online player stepped out from their hiding spot behind the counters. Additionally, a well upgraded sniper rifle picked me off more than once while holed up in a tower. Eventually, I learned to stop running out into the open areas for the snipers to pick me off. Instead, I crouched around the wooded area at the map’s outskirts and in epic revenge killed a prone sniper lying in wait for me but facing the other direction.
I finally grasped the fun in multiplayer. There is a thrill in out maneuvering and being out maneuvered by others as well as the frustration in being outgunned due to unlocks.

Multiplayer experience nets squad points that are used to purchase all items including gun types, attachments, other weapons, perks, and kill streak rewards. From the start, points can be used on any item regardless of player level making the unlock dependent only on having enough squad points. This flexibility allowed me to immediately target my needed attachments that allowed for visual cues such as thermal imaging scopes.

Unsurprisingly, I often miss audio cues. While I can hear the guns fire, the explosive booms, the dogs barking and the helicopters whirring I have little to no idea the direction of the sounds. The onscreen visual indicator of the direction of oncoming bullets only applies to bullets and the dark red color is easily lost on the busy screen. The new unlock system that allowed me to immediately access the various thermal imaging scopes and quickly experiment with the imaging that best suits my disability. Now, I can actually compete online rather than grind through endless deaths in hopes of fun if I can only reach the items that I need.

In the Whiteout map, known by its snowfall and a snowman that I died while admiring in a yard, thermal imaging scopes made all of the difference. Rather than confusion from echoing noises ringing from white hilltops, a careful review of the map let me find and target enemies while I stayed defensive for enemies finding me. My kills were not lucky accidents and my deaths were due to my mistakes, not necessarily due to my inability to hear and recognize audio cues.

There are still changes that would make multiplayer more accessible for me as a deaf gamer. Captioning or subtitling the in-game multiplayer audio cues would be a big help. Unbeknownst to me, the game’s default audio with the microphones muted still includes verbal warnings such as “There’s a sniper” or “They’re behind the tank” that I do not hear.

Perks and unlocks helps players “see” other players easier but audio cues such as the sound of running boots or dogs barking relay warnings of imminent death. Adding a visual component to those audio cues such as the indicator of bullet direction, even as a perk, would assist with missing oncoming players not shooting their weapons and the arrival of snarling dogs.

Call Of Duty: Ghosts is not perfect. The squad points are initially confusing and more than once I accidentally spent valuable points misunderstanding my purchase. For example, unlocking the remaining 9 slots on your 10 person squad requires squad points and each character’s load outs past the class based defaults must be individually unlocked. Save your squad points for perfecting your main character’s load out first.

Additionally, as a woman gamer I would be remiss not to acknowledge that the soldier avatars are customizable as both men and women soldiers for the first time. The gender diversity on the battlefield only adds to the feelings of inclusion.

I did not expect an understandable much less an enjoyable multiplayer experience. Yet, I was suddenly reluctant to return the game. The game is returned and purchased copy is now in my gaming library. In gaming, there is a game for everyone and now the multiplayer experience has broadened to include me, a deaf gamer.