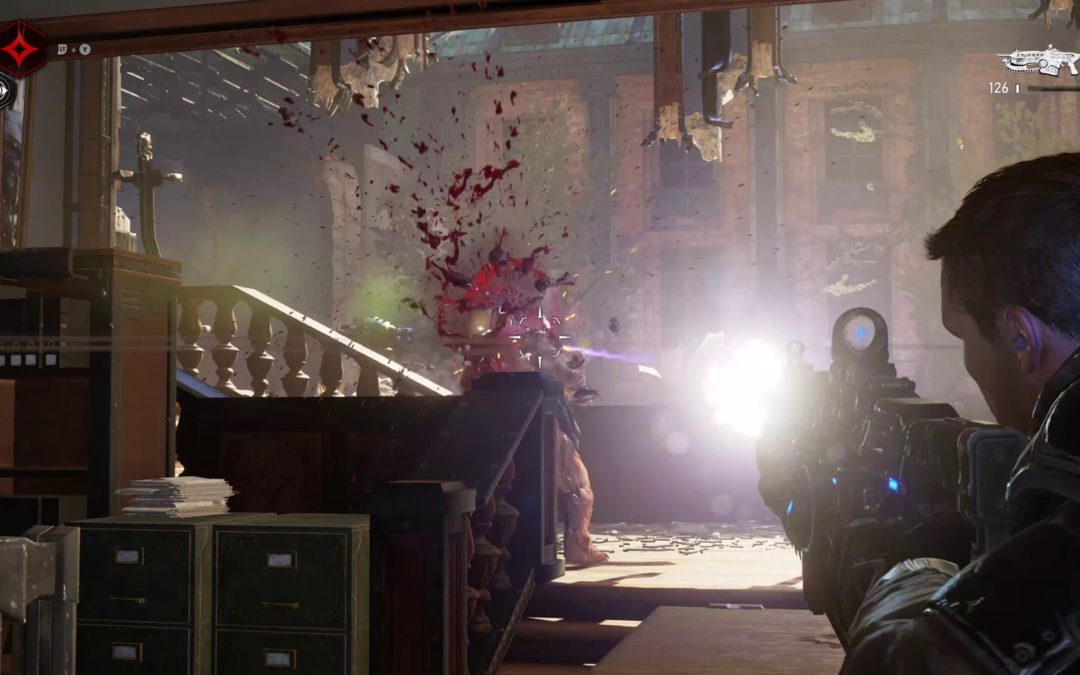 In preparation for this, I reread our review of Gears of War 4, which was the first time developer The Coalition worked on Microsoft’s storied third person shooter franchise. When comparing that experience to my time playing Gears 5, it’s not an understatement to say the shift in the prioritization of accessibility is truly radical. Nearly every major complaint I had about the previous entry to this franchise has been addressed thoroughly and completely by The Coalition.

The game features an improved aim assist which is a boon for players with fine-motor impairments. The classic Gears of War gameplay is still there, and although that gameplay feels a bit squishy and imprecise, the inclusion of this feature makes Gears 5 a reasonable starting point for any fine-motor impaired player interested in trying the franchise firsthand. The Coalition has also included an impressive accessibility suite that not only allows for full controller customization but also allows players to choose which format of quick time events they would like.

In addition to the included features, because the Gears of War gameplay is known for being squad-based, when playing by yourself, the game is especially forgiving since the computer-controlled players can usually get to you quickly to revive you if you’re downed in combat.

In our Gears of War 4 review, we stated that the game seemed relatively visually accessible but could not confirm this because our fine-motor impaired reviewer could not progress far enough to speak definitively. For Gears 5, we can. The game is barrier free thanks to three different color-blind modes that alleviate specific diagnoses, subtitles that are both rescalable and letter boxed, and that no vital information seems to be communicated through fine visual detail. The sole problem that may exist is some of the tutorial text is difficult to read, but given the forgiving nature of the game and the fact that these only exist at the beginning, this is no real barrier at all.

The most marked improvement is in auditory accessibility. Gears 5 features the most comprehensive subtitle system this reviewer has ever seen. Not only are all pieces of dialogue tagged with who is speaking, but the game includes cues as to the tone in which the speaker is talking and nonverbal elements such as when the music intensifies or settles, giving hearing-impaired gamers a clear indication of exactly what’s going on and being communicated at any given time.

We at DAGERS have never before felt that one of our reviews has been so heavily heeded by a developer. It does seem that for Gears 5, The Coalition has systematically addressed every concern. That’s not to say Gears 5 is a game for everyone or there’s no room for improvement, but The Coalition’s efforts towards accessibility have met the definition for reasonable standard, and because of that, we are happy to give it our highest rating possible: barrier free in all categories.